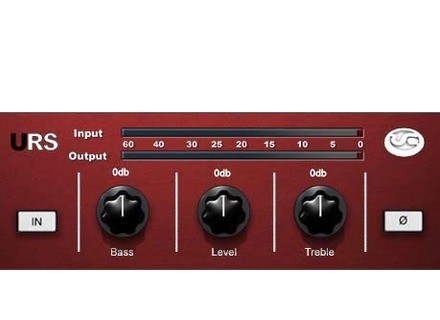 URS BLT
4
The URS BLT Program Equalizer is a really simple, two band equalizer plug-in. I don't own the plug-in myself, but have used it extensively enough in the professional recording studio where I work. For this reason I wasn't involved at all with installing the plug-in. However, learning how to use the plug-in could not be any easier. Literally, this is the simplest plug-in you'll find out there and is only intended for really simple equalization because of this. It's only got two bands for bass and treble, along with an overall leveling knob as well. The bass band is fixed at 100 Hz, while the treble band is at 5 kHz. Even though there isn't much flexibility, it isn't supposed to be used for fine equalization. Rather, it's best suited for adding or removing some brightness or darkness simply and quickly. A manual is not needed in the least!

The system that I've used the URS BLT Program Equalizer on is Pro Tools HD based, so it's not exactly a good judge for how much processing power the plug-in takes up. Having said this, being that it's a really really simple plug-in, it shouldn't take up much of your processing power at all. I would think you'd be all set as long as you have a system that you're currently comfortable running plug-ins on.

For really simple EQ coloring, the URS BLT Program Equalizer is a fine little plug-in. It sounds quite good for what it can do, but of course it's pretty limited in what it's able to achieve since it's only two bands and they are both at fixed frequencies. Even so, it's still useful for times when you're looking to get a real quick EQ job done. The best part about the plug-in is how cheap it is! The price is about as cheap as you'll find a plug-in that isn't free. I wouldn't recommend this as a primary EQ at all, but if you're looking for a simple extra color, this is a super cheap way to expand your plug-in collection.
Did you find this review helpful?yesno
»