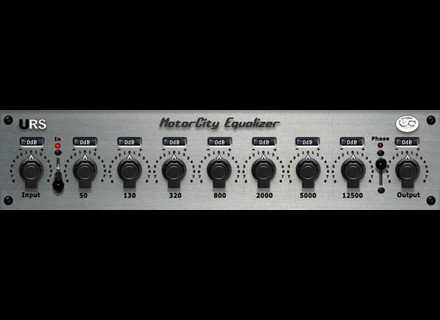 URS MotorCity EQ
4
The URS MotorCity EQ is a software equalizer in the form of a plug-in for Pro Tools and other DAW's. This plug-in is included in the M Series bundle that also has the Vintage Cinema EQ plug-in in, both of which are pretty similarly laid out. I didn't encounter any problems with installation of the plug-in as it was straight forward and easy from the first step. Using the plug-in in general is also pretty simple, as it's a seven band, with each having it's own fixed frequency. The EQ is designed after an equalizer that was used on Motown records according to URS, although I'm not sure exactly what hardware EQ they're referring to. I generally prefer to use parametric EQ's since you get control over the frequencies, but even while I like to have as much control as possible, it's worth noting that the other plug-in in the bundle, the Vintage Cinema EQ has different frequencies to choose from. So between the two different plug-ins in the bundle, you have a more complete set of frequencies than what you see just on this one alone. Even so, you've got a pretty complete plug-in in itself here, as a lot of tone shaping can be done between the frequencies given here. I haven't looked at the manual for this plug-in, so I can't speak to it's make up.

I've got the URS MotorCity EQ and the M Series bundle of plug-ins running on my home recording rig. It consists of a Mac Book Pro with a 2.2 Ghz Intel Core 2 Duo processor and 4 GB of RAM. I'm running the plug-in in Pro Tools LE 8 that runs with a Digidesign Digi 002 rack version audio interface. My system is pretty consistently powerful, so it's rare that I'll have trouble with plug-ins unless I've got a really big session going, so this one doesn't cause me any trouble.

Between the URS MotorCity EQ and the Vintage Cinema EQ that also comes in the M Series bundle, you've got a very nice sounding set of equalizers. On it's own, the MotorCity EQ works great on a variety of instruments, although I find it especially useful for fattening up a bass sound by boosting some of the low frequencies given here. It's certainly more versatile than just a bass EQ, but is what I usually use it for. The M Series bundle is cheap enough that it's definitely worth considering to have as an extra add on equalizer, but I don't think I'd recommend this as your first and/or go to equalization plug-in.
Did you find this review helpful?yesno
»