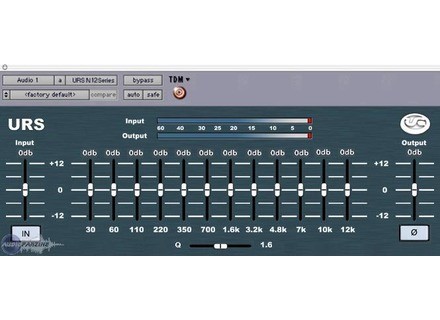 URS N12 series
5
The URS N12 Series EQ was easy to install as I had no compatibility issues with my computer. The interface and overall use of the plug-in is really easy to follow. It has twelve sliders that control different fixed frequencies, and each can be cut or boosted 12 db. It also has an input and output level slider and has another slider for setting the overall Q. It then has a bypass button and a phase switch button. The metering on top is also handy, and measures both input and output. I don't have a manual for this, so I don't know how sufficient it is, but the plug-in is really easy to use and most shouldn't need it.

I am running the URS N12 EQ on Pro Tools 7.4 LE on a Mac Book Pro that has a 2.2 Ghz Intel Core 2 Duo processor and 4 GB of RAM. I run Pro Tools on a Digi 002R version audio interface. With this configuration I've never had any problems running this plug-in and it has always been stable for me, even when running four or five or these at once. I have also run the URS N12 EQ on a Pro Tools HD system and have never had a problem there either.

I've been using the URS N12 Series EQ for about two years. While I usually prefer parametric EQs, this graphic EQ sounds great and is easy to use. The interface is simple and quite user friendly. I have come to love the EQs and compressors that URS makes, as they have a top notch sound quality and are all a reasonable price. The N12 is a classic EQ emulator and has a clean and crisp sound quality. Overall, I recommend the URS N12 Series EQ to both professional studio owners and home studio owners.
Did you find this review helpful?yesno
»

defunes's review (This content has been automatically translated from French)

EQ of high quality I think
It is extremely prcis
the highs are not, like most numrique plugin, "acute decrees" the sound remains the same color.
little or no CPU-intensive
I use it with ProTools and everything is stable, does not crash ever, no problems encountered.

Value of which is still not free. (A bit expensive)
Did you find this review helpful?yesno
»