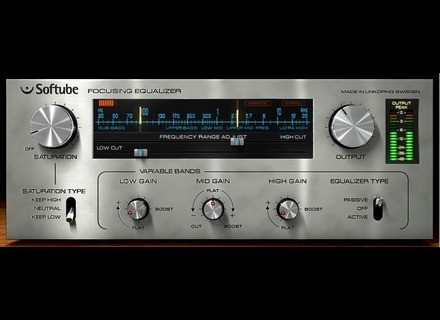 Softube Focusing EQ
4
The Softube Focusing EQ is a plug-in available within the Passive-Active Pack and not individually. The plug-in is available for both OS X and Windows, and in VST, RTAS, and AU plug-in formats. You do need to have an iLok to run the plug-in for authorization purposes. Installing the plug-in and bundle as a whole wasn't an issue, as it just took a minute and is as straight forward as installing any piece of software out there. Using the Focusing EQ isn't too hard, but it does have it's own unique little make up. The top part of the interface consists of sliders for setting your frequency range and for cutting unwanted highs and lows. It then has three bands for further adjustments. The plug-in also has a saturation parameter and as well as the ability to use it as either a passive or active EQ and an overall output leveler. A manual shouldn't be necessary here...

Right now I'm running the Softube Focusing EQ and the full Passive-Active Pack in Pro Tools LE 8 on my Mac Book Pro computer. The computer has 4 GB of RAM and a 2.2 Ghz Intel Core 2 Duo processor to work with. I'm running Pro Tools LE with a Digi 002R audio interface and I'm monitoring with Adam A7's. I haven't had this plug-in for all that long a time, but I've yet to have any performance issues with it. It probably isn't going to be the type of EQ that you can use on every track, but it certainly shouldn't present you with too many performance issues unless you're system isn't all that great.

The Softube Focusing EQ is a nice little EQ plug-in, but it hasn't been my go to EQ for any sort of use. I've been using it as an extra when I'm looking for something a little bit different, which this EQ indeed is. It doesn't give you the most control per band, but you can usually do what you'd like with it between the parameters given. Of course you do have to buy the entire Passive-Active Pack, so I'd recommend checking out the other plug-ins in the pack to see if they also might be useful to you. It's an inexpensive EQ bundle that's worth checking out for any DAW user on a budget or otherwise...
Did you find this review helpful?yesno
»