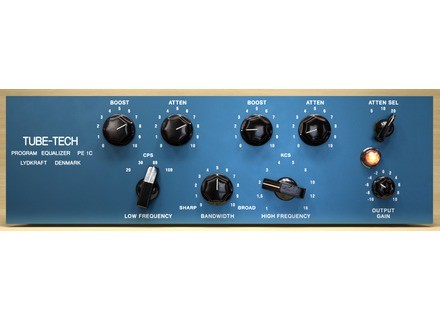 Softube Tube-Tech PE 1C
5
The Softube Tube-Tech PE 1C is an equalizer plug-in that is a software version of the Tube Tech PE1C Pultec style EQ. I've used both this software version and the original hardware EQ, as we have the hardware version at the studio I'm working at now and I've used this plug-in in the past at one of the other studios that I used to work at. Since I don't own it, I didn't have anything to do with installing it and can't speak about what this process entails with this particular plug-in, although it's probably safe to assume it's much like installing any piece of software. Moving onto the interface of the plug-in itself, it's exactly like the hardware Tube-Tech PE1C, and when I say exactly, I mean exactly! It's got a stellar 3D interface that literally looks like a picture of the original. Since the PE1C is modeled after the classic Pultec EQ's, you'll certainly recognize this configuration if you're familiar with the Pultec make up. It's got two bands that each have both boost and attenuation leveling knobs, as well as a set of fixed frequencies to choose from on each. It also has a bandwidth parameter that applies to both of the bands in addition to it's overall output gain knob and it's attenuation selection knob. A manual isn't totally necessary here, as I have a feeling most users won't need it.

Although I haven't used the Softube Tube-Tech PE 1C since the studio that I was working at closed down, when we were running this it was in a Pro Tools HD setting, so very rarely did we have performance issues with plug-ins. The computer was an Apple G5, and although I can't remember the exact specs, it was very quick for a G5. Even though the interface is 3D and all that, it still doesn't seem like it takes up too much processing power. However, it's definitely hard for me to say how it might react in an LE sort of setting...

Although the Softube Tube-Tech PE 1C doesn't have the same, warm tube driven sound that the original Tube-Tech PE 1C, it still sounds awesome and is great for use across the board, whether it be for mixing or not. I love the Pultec style EQ configuration, so I always found this plug-in easy to use. It's been a while since I used this in the old studio that I work at, but I'm lucky enough that the studio that I now work at has a real Tube-Tech PE 1C, which I have to say definitely sounds better when compared to my recollection of this plug-in. It's worth mentioning however that this plug-in was indeed developed in tandem with Tube-Tech, so they had a say in this thing and certainly thought it was a good enough emulation to put out under their name, and I'd definitely agree that it's as close as you're going to get sound wise. The plug-in is inexpensive enough where it's definitely worth checking out regardless of if you're a home or professional studio owner. I love Softube's line of plug-ins that emulate and are endorsed by their original manufacturers, and their Tube-Tech stuff is some of their best...

Softube Tube-Tech PE 1C
5
The placement of the knobs is pretty damn bad I think, the first knob "mitigation" attenuates frequencies identical to the bass boost. The treble attenuator has a variable frequency cons that can be chosen via the selector in the upper right (5kHz, 10kHz, 20kHz)

The change of Q (in the middle of the ring road) is only designed to boost the treble.

it's so damn bad, that many shops on the net are wrong in saying that the first attenuator attenuates the medium, which is completely false! (And as they copy each other information about the products they sell, and although they were all wrong! HOME STUDIO WORLD SOUNDS etc. ... all this not very serious)

very good EQ. I've never used the original, but after many videos and listened to demos, gait and stains are made in the same spirit as the original (well the TUBETECH the pultec I do not know, apparently he would have 2 frequencies less in the treble switch)

It really works on battery bus, especially on BAR, the bottom is very punchy, as if the sub planing and swelled to death following frequencies.
but I often read that the bass is very special, we're talking about serious "pultec-ien" and it is clear that it's clean and distinctive. The kicker BAR becomes big "ball" which collects and mixes easily. (AC also needs some compression as it is a ring road "all tube")

You have to play with the knobs and faders boost this changes the frequency curve I do not know how but it stains and the result is very interesting.

This emulation is perfect for me, after it has no equalizer in the medium, I think it should be used to color more of a source additional EQ, and not as the main EQ.

TUBETECH this EQ is a reference, it is part of the pantheon of EQ!

(The guys at tech tube were impressed rendering plug-in, even if they insist on saying: "There's nothing like the real thing!")

Published on 07/18/10
The Tube-Tech PE 1C is the Pultec style equalizer, a passive, tube-based equalizer designed to be suitable for different sources ranging from bass drums and guitars to vocals.