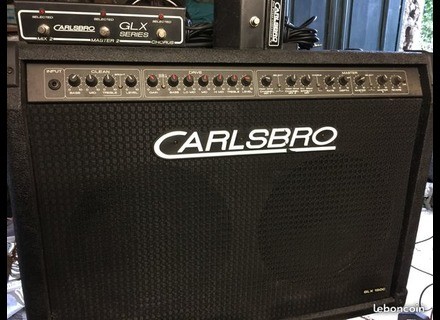 Mortal Kastor's review (This content has been automatically translated from French)

Level connections, it has a (single) between jack, a stereo effects loop (send one, two return), a stereo line output (which does not cut the sound of the amp) , an outlet for his 3-button footswitch.

APRS has become complicated:
two pots and a switch, two pots allow a mix between the clean channel and drive channel. The switch toggles between the two "channels", its function is featured on the footswitch.

Then Knob dry / wet. Wet the bottom, nothing more is what goes through the loop.
Part chorus (switchable by footswitch or the facade), spleen & depth.
Finally, two master volume, with a switch in the foot frontage traceable to obtain two volumes Different.

Finally, a spring reverb for Knob

it's a 2X12 combo rather large and relatively heavy (28kg)

The pros:
two separate signals sent to HP (useful if, or playing with the loop).
Robust
rglage the clean / drive on each channel
5 Band EQ
the 2 master

The -:
no exit "headphone" compensates muting the amp
a lil rglage of presence on the clean channel does not have unnecessary

The config is simple, upon the principle that a Capt. of the two channels with the rate of clean / drive is mixable for everyone.

Power level, 2x75W 2 hp on a performance of 97dB 1W/1m sends a very strong. Same for the transo. Sounds home (amazing, in fact, even very low volume). Absolutely no concern for group play or in a bar. For the small scenes pretty diffused 2X12, within a reasonable (if need transplants, avoid the line output is up, rather put a microphone in front).

Pleasant thing, both are progressive and specific on master.

The Pramper (as well as reverb and chorus, by the same) are bypassed by attacking directly the advantages of power with an external Pramper.
not need manual.
It is basic, has rings, it's effective.

Big positive, unlike a lot of transos, group one hears me.

So we will go from bad to to the (very) good:

The sound is really crunch bof, compared to what is currently transo / modlisation. with more gain and voicing the modern, has become more musical. A perspective when same: in comparison, far better than a fender FM212R, or a marshall mg (especially rpt is specific on, audible).

For my part, if I want to use crunch / distortion, spent a Pramper external (marshall jmp-1 in this case). And has sent the Tagus ragit much power, the HP celestion intgrs marry well with the jmp-1.

The reverb is pretty average (I did not say bad). I he prefers a reverb in the loop, but otherwise it remains audible.
The amp ragit diverged according pedals sometimes taped. It's going very badly (DS-1 for example) good (OD in the clean channel ...)

The chorus, love. It sounds too typ 80's, it can be discreet to add momentum, or to impose Manir very pleasing.

It happens that I like most: clean sound. presents, respecting the grain of the guitar is capable of being slammed as dark, dynamic, super specific on. remains clear and not compress very high volume.
This has nothing clean envy of all lamps (except disturbance in the high end of the full tube).

In conclusion, for me it is gnial two uses:

- In clean
- When attacked with a Pramper in the loop.

Unlike the current Swiss knives, not possible to get 20 DIFFERENT sounds and record them in the pc impeccable. He kills in clean, or to amplify a Pramper, the rest is not his thing, period.

Exchanged against a Pod X3 prcisment for the inverse of a gas plant. And it does. Sounds home, rpt in a bar. It's a tank.