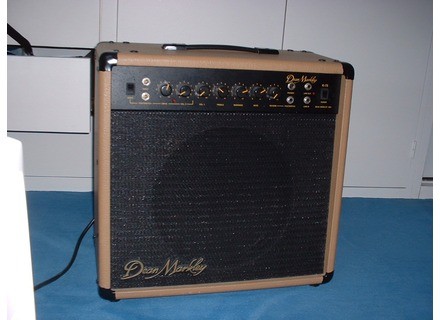 Dean Markley K-75
4
This is a tube amp made by Dean Markley. This amp has 50 watts of power delivered to it, and has two channels (clean and drive). It has a three-band EQ for both channels, as well as reverb. Channel switching and reverb are both capable of being operated by footswitch. There is a single 1/4" input. The amp features one 12" speaker.

Getting a good sound out of this guy is not the easiest thing in the world, but it's manageable. I would say that it's probably not going to cut it for gigs, as it's not quite loud enough. It is, however, more than capable of being a practice amp, and being a good rehearsal amp for smaller, quieter bands. The footswitch makes using it much easier. The manual is pretty barebones, there's not a whole lot going on that you couldn't figure out yourself.

This amp sounds pretty great at low volumes. The clean tones have a lot of depth and character to them, and they really sing. That's why this is such a good rehearsal amp. When you crank it, though, it starts to break up and it's a little too much distortion to deal with, honestly. It doesn't have good distortion like most good tube amps do once they start to break up. The drive channel has a good sound at the same volume levels, great at low volumes but horrible louder. So as long as you keep this lower, it'll be great for blues and country, as well as lighter rock stuff. I'd say that the midrange is a little too loud on this amp if I had to critique the frequency curve at all.

I miss the great breakup of a good amp when I'm playing this amp, so I'd have to say I'm a little disappointed. However, I get good use out of it when I'm just rehearsing on my own, working on scales and ideas. It's a pretty cheap amp and a good price for a practice amp. I know Dean Markley doesn't make amps as their main product, but this is a decent foray into that world. I wouldn't sell my Fender Champ for it but hey, who would?
Did you find this review helpful?yesno
»

cediblue's review (This content has been automatically translated from French)

It was my first amp to play the Blues at the harmonic and really is not for that!
The sound is really too christallin blues and even a footswitch drivers in this hard enough ear. But for a clear sound is not bad. I remember I went to a pretty good song!

First amp .... first experience, so it deserves to be reviewed, but not for the Blues, not the masses send it, so for the rock either. Strengths: Good clear sound, a body double so convenient return and a double entry to play and sing along!
Did you find this review helpful?yesno
»