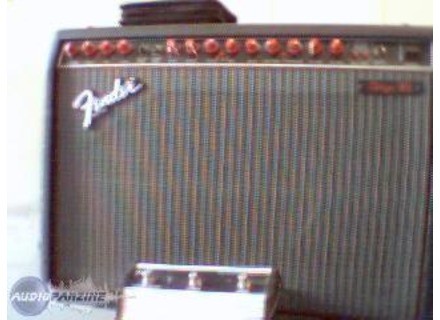 Fender Stage 185
5
150 watts. (Not conservative at all, trust me.) Open back 1x12 with stock “blue” Fender speaker . This is a “red knob” model so my understanding is that it’s considered vintage. Two channels – Clean and Overdrive/Distortion with a “boost option”. Clean has Volume, Treble, Mid, Bass and Mid-cut switch. Overdrive/distortion has Gain, Boost, Treble, Mid, Mid-Boost switch, Bass, Contour with “tilt” switch, presence. The amp also has a master volume and reverb. Two inputs, one for channel switching, one for parallel channel mode. The amp also has switches for channel switching, or you can plug into the footswitch jack (which was included) to switch between channel 1 and 2 as well as to select reverb and/or the boost function. Effects loop and speaker out jack on the back panel of the amp as well.

The controls on the front are many, but it's fairly straightforward, especially if you are familiar with Fender amps. The &quot;presence&quot; and &quot;mid-cut&quot; controls are particularly useful. The only drawback is that I don't understand the purpose of the &quot;tilt&quot; control. I usually put the treble on 9 or 10, the mid on 0 and the bass anywhere from 2 to 9, and get great clean sounds, or great distorted sounds with a pedal. The amp is fairly heavy. As with all Fender amps, this is built like a tank. You could probably drop it from a skyscraper and it would keep on ticking. I did have to get the rear input jacks fixed for $20 about 3 days after receiving the amp from Guitar Center. But hey, it was used.

This thing is LOUD ! I don’t think 150 watts is an overstatement ! If you go anymore than 1, you’ve got band-mates and sound engineers sneering at you! Also great for out-competing your annoying rhythm guitarist in the volume department! Clean channel is the typical “glassy” Fender clean that many of us have come to love. The treble can be a little harsh, but hey, it’s a solid state! Overdrive channel is OK, but no one usually gets a Fender for the overdrive/distortion. (See my comments under “overall rating.”) I use the “boost” function on the distortion channel via foot-switch as it provides a great volume boost for solos !

This is a great investment for a total outlay of about $190. You can’t go wrong with Fender, in my opinion. I am more concerned with clean sounds than I am with distortion. You can’t buy too many “clean pedals” but distortion pedals abound. So if the clean sound is amazing, as it is on most Fender amps, then all you have to do is put a good distortion pedal through the clean channel, and you’ve got a great clean AND distorted sounding amp !

-grm-'s review (This content has been automatically translated from French)

Fender Stage 185
5
The course 185 is a transistor amp 1x12 150w hp developer that!
Deriere can be connected to an 8 ohm speaker (does not cut it in. the hp of the amp)
it made the reverb, and saturation.

Ba is simple amplifier as:
1 / buy a jack
2/avoir a guitar (and know how to play c tjrs more convenient)
3/brancher the jack from the guitar amp al
and finally c lol
xavier even be able to do lol!

It is a fender that vieu Preska ke good except for low distortion with a mute in pale or I find it really impeccable if he is not avai-inch problem!

bbhack's review (This content has been automatically translated from French)

Fender Stage 185
5
In ocazz it is scarce but there are still a ridiculous price (~ € 200) and since this amp is really not bad for the stage, I start a small personal opinion.

- Any amp transistor, CMOS technology, "tube simulator" (I finally reminds me that what was written on the record )
- 2 channels, eq SEPARATE
- Settings cannal 1: 3-band eq with a switch that I call "medium cut"
- Settings cannal 2: 3-band EQ + gain + contour + sw + gain boost presence
- A well-typed reverb "fender 80's" (we like it or not ...)
- An effects loop with adjustable flight
- 1 HP 12 "that sounds (from memory it was an Eminent, I have not thought checker)
- Output for an external firm
- Footwitch channel / reverb / boost
- A considerable weight (~ 25 kg)
- Power: 160W announced in the manual, I personally would say it sends the same as a good 50W Tube ...

Simple, Eq efficient power sympatoche. Personal I never exceeded the 4.5 in live use.

To play at home is enough cotton for the potentiometers are exponential, not linear (and therefore to play a low volume is not clear).

Anyway it's more of a combo amp that scene work.

By controlling the boost via the footwitch provides ease of use in live ...

Its very very clear! It is "transistor", but honestly the sound is straight and shiny with a touch of velvet.

The eq is effective, the medium sw is useless in my opinion but some will find their account.

Drive sound is rather a very successful time for a vintage Fender transistors. !

Let's say that the saturation is variable and flexible . It is a bit of a crunch degeu, to a good OD to a saturation thickest approaching some of the mesa to Santana (I say "closer"). Of course this is not a metal amp, but for blues rock & roll ca ....

I have rarely met a saturated channel as good on a Fender transistor. Also the eq of this channel is fairly comprehensive and provides good sound modulations.

Rendering a high volume is very correct in the clear as saturated. I think the HP 12 "is good and receives well the power of the beast.

Having owned and used a number of smaller transistors Fenders in the last century, I think this one stands out from the rest by a saturated sound that is really nice which is rare enough not to be stressed ...

3000F purchased from OCCAZ in '93, sold for the same price in '97, I never seed with. The next owner was very happy for the next 2 years as well. In short, I think at the time were built of solid in the range from fender.

Also the sound quality (clear _AND_ saturated) was much higher at different Valvestate & co that was at the time, for a similar price and less power.

It allowed me to do a lot of little scenes and various student oxen, 2 times the Feast of the zik outdoors, and it sounded!

In conclusion I would say it's a good "little" amp, versatile, sounds great plain and the channel is saturated well above average "Fender transistor".

It was the era of 'simulation of tube amp via a CMOS circuit' Fender ... Personally I have never made any reconciliation with his "lights", but the dynamics and warmth of his appointment were.
In short, if you make small / medium scenes in a book rock / blues / pop and you find this amp to OCCAZ qq hand, do not hesitate to try it and if the HP holds up I think you will be pleasantly surprised.

As the price occazz is rather ridiculous to the possibilities of the beast, I think it's a very good deal!