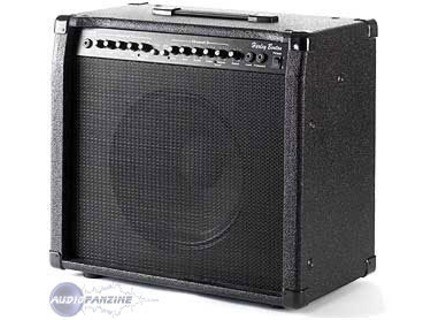 Harley Benton HB-80R
5
I for a month, but I had another for a year in 2004-2005. Only change, and importance, it now contains an HP celestion seventy eighty G12P-80. Incredible value!
3 channels, in fact, an option with clean overdrive and a very versatile saturax with voicing and
gain extended (from tough to clean).
3 band eq for the clean / overdrive and two bands for saturax. The channels are footswitchable, and without any siouplait bed.
As his reference does not indicate the power is 40 watts rms as is 65 watts and by connecting another hp 8ohms. There is a jack behind, along with a line out jack format ditto.
It is already very complete, and in addition there is a loop (stereo jack, the point is the return) located at the entrance to the amplifier power output.

The clean sound is beautiful, warm and clear, lively, but happiness.
The crunch is also seen, good presence, you can work.
The saturax very end, voicing allows all variations, it's hot too.
The secret of his? MOSFET! These are special transistors that are closest to the sound
tubes ...
The average power is increased tenfold by the celestion is already strong. Leave a 4x12 at the local, and lugging the amp at home, no need for bigger or stronger.

The construction of the box is poor, there are mini brackets screwed to hold the signs, never seen that ... But hey you can paste lists, since the sound is good as is.
No noise, nothing, royal. But I do not use single coils only kind bruitcaster either.

Jazz, funk, blues, country, blues to power moore, metal, you can do everything with this amp is absolutely amazing.
In short, despite all my best pieces I bought this amp for home harley because its clean sound is really great, without breaking the ears of neighbors ...

For the price you will not get better, not possible, the HP is only 110 euros ...
In fact, there is no headphone jack, the best thing for this fun night is to send the signal (line out) into a multi-effect with simulated HP (korg pandora, even Paleolithic) and make the amp mute with a single jack (not welded to a wire) plugged into the effects loop.
Last observation, the amp seems to accept grudgingly pedals distortion / overdrive, I noticed the same phenomenon on the Fender bassman / twin / deluxe.
What is happening is a lack of presence and intelligibility, while the same on other amps pedals are nickel.
In conclusion, guitar and Harley-fil-basta. And what's good like that!

grass's review (This content has been automatically translated from French)

I confirm what was said below: it is a ratio q / p terrible! he sounds strong enough for live use and repeated in club.le HP celestion is clear and warm, with bass that drool pas.je him added a footswitch, it's nickel, I have a 3 channel sounding good for rock music (I also have a tube amp ...). little heavy, with me very often now see maintenant.faut durability ...
EDIT: 21/02/2010: I did one rehearsal yesterday with my rock band (drums + bass + guitar / vocals + guitar) and although no pb for me entendre.les nickel 3 channels, although many on it a bit cooler than my amp lampe.bref, happy! and celestion cash very well ...

AlfredM's review (This content has been automatically translated from French)

Harley Benton HB-80R
3
40W transistor as is, with possibility to mount 65W adding a closet.
2 channel
S desire but a good finish leaving this price!
Insert, Line Out (I forget?). not bad!

A manual? What for? Using ultra-simple.

Ben you plug, you play a sound. The sound is not bad but everything is relative ...
're Bluffing to beginners because it's your first amp, but after you heard other amp is more the same story!

HI-1 (saturated): this is for me the point of this amp Plutt positive: a distortion from the mushy crunch, helping refine the knob Voice saturation. it's not so bad, frankly I am quite satisfied, a pleasant crunch, little resemblance to the soft saturation of a lamp!
For the cons disto type transistor is VERY rotten (you see marsahll only worse!) J'vite push the gain is dirty! qualisation the two bands is approximate but effective!


HI-2 (clean): Clean sound, it's not a sharpness issue and frankly the EQ is not blurred. Okay, I'm playing a rating on a small 5w lamps gnial and there's no picture, but I still have not succeded in finding a sound convincing! The sound is difficult to master, too dull or too aggressive in the high-medium rather.


Note: For distortion, I play with a multi-purpose as that of'ampli does not suit me. And even when it's something else!

I use it for 2 years now, my first amp!
At this price ... was still a businessman bought 130 from Thomann, I am generally satisfied! Report qualitprix unbeatable for that power!
Solid level I can not tell you, he quasimment not moved in two years.
Recommended for the budget limits.
on the other hand, if you intend to hear your drummer hitter, you can reach the very limits of possibility of this amp, but see!
Did you find this review helpful?yesno
»