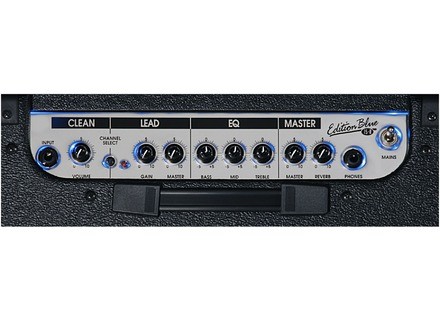 Hughes & Kettner Edition Blue 15-R
5
This is Hughes and Kettner's 15 watt practice amp. It has an 8 inch celestian and spring reverb. It has a clean and a lead channel and also includes RCA inputs. It has one line in and a headphone jack. I don't use this amp for gigging but it is a great amp to plug into and play in your living room.

I wasn't looking to buy an amp when I made this purchase, I just happened to come across a Musicians friend blow out sale and I picked this amp for $49 plus $5 shipping. I figured I couldn't go wrong.

The little celestian sounds great for only being an eight inch speaker with 15 watts of solid state power pushing it. It really shines with single coils through it in the clean channel. It has a 3 band eq which is responsive and can be dialed in quite nicely. The lead channel prefers humbuckers, and it is not just a on off distortion sound, it is actually pretty controllable which was a surprise for such a cheap amp. The spring reverb also sounds great and and is a legitimate reverb, not emulated. And of course, the blue back-lit panel is very cool.

There really isn't much to say here, especially for the price I paid for it. But there is one thing, and it really isn't negative. The amp claims to have tube emulation to sound like a tube amp instead of a solid state amp. It simply doesn't sound like a tube amp. If you get on it tries to sound like you overdriving the tubes, but it is all or nothing, there is no level of overdrive here. It just loses clarity, but it isn't a tube amp so I really can't call it a negative.

The amp is solid, I have dropped it a few times and everything has stayed intact. And as for quality, it has a celestian so they aren't skimping on material. I haven't taken the amp apart so I can't say anything about the rest of the internals, it certainly isn't hand wired but it has held up perfectly so far.

This is by far the best little practice amp I have had the pleasure of playing. It is built well, sounds good, has all the controls needed and then some, and with an MSRP of $189 and can still be picked up for just over $100 is an easy decision. Great little amp.