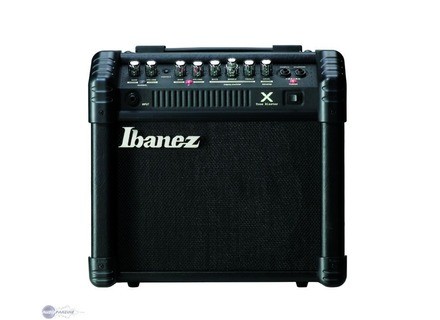 All user reviews for the Ibanez TBX15R

Ibanez TBX15R
5
Amp Economic very surprising for the class: it sounds like it big!
15 watts my eye, hp 8 inches but it seems there are 3 ...
Equalizer semi-parametric ACTIVE therefore ultra-efficient (nothing to do with a marshall) and gain more on the master channel also clear (single category).
No remote control is possible but not damage due to mistuned equalizer common to both channels. The settings that go for the clean unsuitable for saturax serva and chives.
Aux in, phones out unfiltered (kss kss!) And that's it.

Very simple, once you got it that's one thing at a time, clean or saturax.
The volume and scale sound generated by this little monster is exceptional, must be heard to be believed.
There is a constant background noise sufficiently large, the headphones also, I think due to the active equalizer generous. So for the evening in the apartment is not that great.

Saturax we must dig into the midrange otherwise it loud, and add bass and lower treble. Compared to the perfect clean sound I hear.
But in two times each channel is very well balanced and sounds of hell.

Surprise, it's clean. Turn the gain limit-the limit and you're still clean with a warm to Polytone jazz, full bass and beautiful mids, treble just spicy as you want, all at a volume that seems to defy the normal laws of acoustics for such a small package. Especially since I'm not the amp in a corner, but in the middle of a wall.
Moving to saturax is equally stunning but in a very different, blueseux go your way, rockers at heart with big cons do not go off!
The sound is a dynamic, freshness and power of persuasion as we wondered how Ibanez did. Especially as compact and inexpensive. It's simple, none of my distortion pedals in the clean channel comes close to the saturated channel alone, we can say it is worth more than its price.
I installed a hp luxury inside, because I had it in a corner, but stock is already very well (to say the origin is a 4ohm 50Watt!) So no worries.

This is the first small amp that nails me on the spot at this point. The intensity and heat of sound, especially its size, nail in place.
To eliminate his only fault I installed a gate passive (stereo attenuator) like that more than background noise. But hey I'm a bit tedious, and a perfectionist.

Take it home with the boys for the evening, will struggle to compete ...
At the risk of being heckled, I invite jazz musicians to test the channel clear of this little amp is easy to carry and pay, he just might do the trick!

For blues and derivatives of the time, rather than more pedals this amp I would take the big brother who has a 65W integrated circuit TubeScreamer supplement (and two equalizers and two types of gain for each channel). At least it works and it's not more expensive in the end.

This small 15w was for me a sacred revelation, he types very strong, it is light and portable, and its price given its quality is absolutely ridiculous.

zitac's review (This content has been automatically translated from French)

Ibanez TBX15R
5
It is a 15 watts. I never grows more than half the maximum volume. I use it in an apartment.

- The configuration is it simple?
Yes, trs simple
- Gets it easy to sound good?
Yes.
- The manual is clear and sufficient? ...
There is an online manual I think, but there is no need.

- Is it your style of music?
Yes, I play rock and some metal.

- With what (s) guitar (s) / low (s) or effect (s) do you play?
Yamaha pacifica 112
- What are the sounds you prfrez, you dtest?
-Prfrer: big distortion, low thoroughly
-Dtest: big distortion, but low

- How long have you use it?
2 months
- What is the particular feature you like best and least?
-Most: the simplicity of the amp size
It least: nothing

- Have you tried many other models before acqurir?
No, no

- How do you report qualitprix?
Great

- With the exprience, you do again this choice?.
Yes, assurment.
Did you find this review helpful?yesno

Ibanez TBX15R
5
In the list of products, this is not TBX15R therefore shall be upon him I will do my comments.

Transistor-
-15 Watts
-Headphone / CD-MP3
-2 Channels (clean, lead), but only an equalizer for both.

I have a large amplification at home (mainly of ENGL)
I was looking for a small portable amp for quiet and train vancances.

Frankly, for the price (118 euros) and the small size, the sound is terrible on the lead channel and clean (well not worth my stuff is clear ENGL). It is a dedicated amp to the metal. I really hallucinating. I was not expecting it! I play an ESP V-301 with EMG Hz H4 mic, and are pleasantly palmuths resssentir. The only thing is a shame equalizer for both channels.
I tried other amp in the same category (vox, Peavy, etc ...) and TBX 15 R range in the closet for good. I even tried the line6 its direct competitor (which sounds very cold). Anyway, I'm fed up with the modeling ...

Expect to breath if you put the gain at max!

For those who want to start scratching and have an unfortunate tendency to love powerchords, this amp is for you!

- It suits me very well. Of pretty clean (it's not the clean fenderiens but hey ...), the saturation surprising and an equalizer that allows you to vary his sound at will.

I who am not very Ibanez, I deceived.

Value / unbeatable price.
The sound is the appointment
I regret that I have not offered 15 years ago!