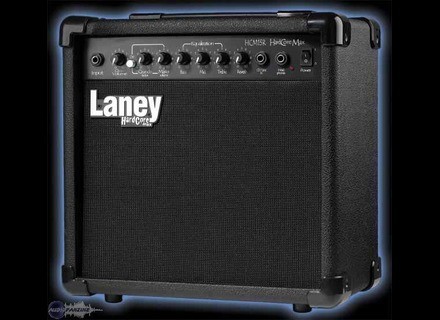 
1 user review
Find it in the classifieds starting at $40 Avg used price: $40

Laney HCM15R
5
It is a 15 Watt Amp (Submitted although it must be said) a transistor
The connection is very simple: Input / CD / Headphone

There is a volume for the clean, one for distortion, a knob for the rate of distortion (only worry about what it takes to put a knob a minimum of 7 for one's drinking!) And a 3-band EQ !

I would put 9 because, despite its simplicity is not a 15W trs expensive so we do not ask much about connections and setting level

Nothing more simple, as stated above.

There are enough facillement its sound, whether clean or distortion even though the channel "crunch" is really limited to a distortion mtal we forget AC DC or Guns ...

I play mainly mtal (Death / Black / Trash, DOOM) so it's not with this kind of amp that you get what's but if I buy it for my apartment. being given that it is too small to put all my stuff.
It sounds not too bad I find in disto despite a lack of gain (which comes from the guitar I use with ... a copy of strat wooden crate)
The sound is clear enjoyable, it did not have too many characters but with some effects, it is more than adequate and usable.

APRS one month trial with my Start copy and my Ibanez, y'as not to say, the clean sound is really usable and makes this amp a versatile if it had a few effects available, and I found IBANEZ of characters with this lil Amp ... especially when the EQ is rglbr /> The EQ is effective, as the reverb (I think what was clear but I'm not sure) anyway it plays its rle.
I plugged in my Top and Vamp is not too bad when you put the knobs in a way that I be as a "neutral" as possible!

I spend my note of July 9 APRS test especially with a good scratch was a gain powerful enough guts on the metal.

On 11/05/05
I no longer have the layer but I use Ibanez as the secondary scratch ... Nickel in clean and distortion, as I said prcedement.
His only default is a real breath Gnant when there is a little too much gain, but I think with a Noise Gate, the problem would RESOLUTION but I did not! it's only default. Same with my EMG ESP, this noise is quite Gnant

No complaints, adcouvrir because I feel we did not think too much too often

I use my guitar avce secondary in my apartment which is an Ibanez and it sounds nickel for the price (100)
I tried a few other models completely DIFFERENT Fender and Marshall, I find this one more original!

on the other hand I find the name of the SERIES "HardCore" a shit, it's not terrible from Laney, it makes too much business for amps that are not at all HardCore, at least not only.
It seems to me costo and ready to travel (I buy for AC!)

a view to wear, right now it fully meets the rle I assigned! I conquered

On 11/05/05
Now that I sold the stratum and I use my Ibanez as secondary scratch, I redcouvert this amp, as well as its clear that disto ... has the breath, it's really terrible, I had two small amp like this when I started scratching and I felt really rotten and if I had it I would have kept it ' is something on ...
Did you find this review helpful?yesno
»