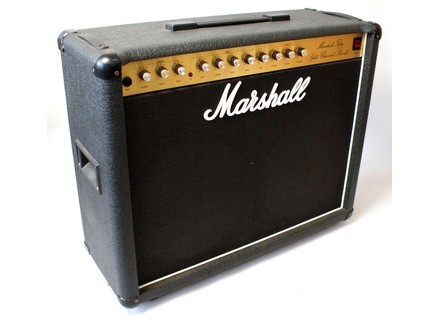 falken7's review (This content has been automatically translated from French)" Surprising"

This amp to an interesting feature, as the name suggests "split chanel" the two channels are mixable. There is no channel selector (except footswitch) and suddenly can modulate both channels to find his sound. A bit like an old plexi (without jack). This feature is very interesting because it can shape a terrible sound and light crunch with just the volume knob of the guitar. Very suitable for humbuckers. I rejoin the previous opinion, there is a good sound very quickly. Equalization is fine and the presence button needed to climb on stage. Its close to the Marshall JCM 800 (the design is similar ... Lamps less) transistors 80s are above what we find today.

Marshall of his race. I play a Gibson Les Paul Classic 2005. Very nice clear sound. Great for blues even edgy, with a TS and a good analog distortion can even tackle the heavy without being ridiculous. Rather I play 70's rock and there is great. Perfect by repeating or small / medium sized scenes. Focus analog pedals, he does not like the digital effects. The effects loop has no interest for me. I am careful to give an opinion on the matter. Spring reverb. Simple but effective, the race knob is a bit exaggerated. From 5 it is difficult to use.

This is an amp that is rare but make transistors that can still be found pretty cheap. Since it is indestructible and extremely simple design (and thus repair) is a good plan.

david45000's review (This content has been automatically translated from French)" marshall of the 80 that happiness ..."

no manual is just the knob fiddling and all is well ..

I love playing with little effect pedals and it goes very well
less there are, the better is c ..
stand by the less, no problem of brittleness, breakage of lights, glow, it can be off the move on, as this amp for practice

not trivialize the amp rating of the transistor remains in full production jcm 800 if deem tt lamp (not like these transistors these days that sounds like stereo, flat, cold, loud, and the degu .. .. e)

because it has a huge dynamic, when I've had I've even opened to be sure it wasn t so much a hybrid sound my tape, my guitar is to respect and warmth of sound and rather amazing.
I play a gibson les paul custom (490r/490r/490t) and sends terrible ca ..

greatly embellishes the reverb sounds if abused too

c is the gain of marshall
for having a jcm 2000 tsl, the lead of 5212 resembles the second channel of tsl

in c Clain is crystalline and very dynamic,
in the lead are heavy rhythm and solo passes without problem with a booster during a concert
the knob responds rather well

has strong volume gain s thickens and increases celetion unflinchingly spits and diffuse with a good accuracy
it allows to tackle the big hard rock with no problem ..

I've never exceed 4/10,
above it covers a drummer very angry at big feet
So a huge reserve of power


the two volumes and a master allows all the same apartment to work without too much trouble (and even that ...) attention to the neighbors all the same

I have for quite some time
It is a bit big
, A little heavy,
but no failure since no surprise
I would do this choice without concern
a nice surprise for an amp to try