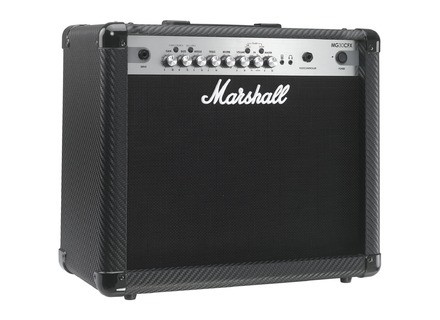 ForMyLast's review (This content has been automatically translated from French)" Bad"

Configuration is very simple, there is a manual, but frankly I feel they take customers for belated first "Treble control: turning down the treble decrease, which will have the effect of sweeten your sound. " To get a good sound, is another matter.

This amp is not suitable at all my style of music (metal). I play with a Charvel and Ibanez equipped with EMG 81/85. Both channels of distortion are just awful! Drafts and too much breath. We can not do anything with it. Clear its still happening. The crunch it can still go ... Effects, I never use, I use a ZOOM G2. Without pedals, we can say that this amp does everything, but nothing well.

I use it for about 6 months, and finally it serves rather amp relief when a friend come play with me and did not bring his. Before buying it I was playing on an Orange crush 15r, so necessarily store the sound seemed better than my amp. I bought three months later a Line 6 spider valve mkII 212, it is perfect! With experience, I do not have that choice and would buy a tube amp directly.

Johnny R's review (This content has been automatically translated from French)" Excellent for the transistors!"

The setup is fairly simple, the manual is VERY clear and detailed, we see immediately that we are in the presence of a great brand ... I just struggled a bit to understand how the presets, but nothing really bad.
Gets it easy to sound good? YES!
With effects that are successful, and a 3-band EQ, it's pretty easy ..... and once you find THE good sound, pressing the magic button store, and it is saved! but happiness ...

I play primarily punk rock, a little hard, grunge, and sometimes small rides clean or with just a slight crunch ..... it suits me perfectly.
In clean, it really is crystalline, and if you add some reverb and chorus, was quick to say, "but this is me playing there?" the channel that has surprised me the most and crunch .... I said to myself: "? crunch with a transistor amp," I was a bit skeptical, and I confess that I stayed on the C.. Certainly, it lacks a bit of momentum and sustain compared to a tube amp, but adding a bit of reverb and delay, we arrange everything well ça.Même OD are quite acceptable compared to many of other amps! Again, of course it is not at a pedal overdrive distortion or external, but some amps are .... it's still more than adequate, and at first it may be appropriate, for someone who had a budget a little tight.
I play with an Epiphone Les Paul Standard, and a copy of Les Paul Junior Custom 77.
So clean and crunch are my favorite channels, and the OD, I prefer despite any external effect. Especially since the amp accepts fine staying on the clean channel.

I use it for only 3 months, but a fairly regular basis (at least one hour per day)
I had a Bugera V5 with lamps Mesa Boogie, I sold it, it will tell you! In fact I could keep only one, and I chose Marshall for ultra convenience and its more than adequate.
I also tried a Vox VT40, nothing ......
What I like is the presets, the pedals, the 3-band EQ, the HP 10 ', the look ...... all in fact! The value for money? excellent.
As I said, it was still not the dynamics of a GOOD tube amp (I said well BON), but frankly, I do not understand WHY the Marshall MG series is so criticized on many forums! So maybe the old, the DFX and others were not terrible, so I do not know, but this new series is very good in my opinion, you can not say otherwise, unless there is bad faith .. to see ... the reliability over time ..... for group play, I rather advocate the MG50 at least because it would be a fair bit.
I bought this amp mail without trying or anything, but I thought he had a chance to give this new MG series ..... I have no regrets at all and I would do this choice eyes closed! except perhaps if I was very fortunate, but it is on, is that I would stay at Marshall!

Marshall MG30CFX manuals and other files