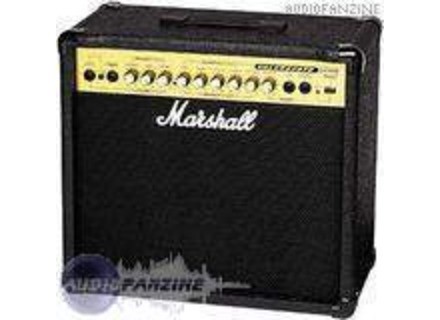 hardi_ami's review (This content has been automatically translated from French)

comprehensive issue features I think, maybe not as much as the new series (DFX I think) but I'm happy, and then I like to have my effects pedals

Extremely simple to use
channel clear with my old guitar (Samick a rotten, in fact I would not recommend this brand) I had all his feeble, poor, now I have an ibanez rg570 and I confess I like the sound bcp coming out, although it would benefit from a little more specific. I have some feedback, but it is not necessarily due to the amp, I'll have to track it
In short, expect good mics!

Overdrive channel: all the good, good distortion marshall (ok it is not a tube amp!) only slightly less interesting (to my taste) that my home-made tube screamer pedal. can range from a soft overdrive (quite hard to find the settings) to a pretty cool death metal, which is not a metal zone! but good for the price ...

It's been a year since I play guitar, I start to get along well but I still consider myself a beginner. I play mainly rock / metal (and punk when I want to play something easy that sounds good! to let off steam wholesale). I do not use the overdrive channel since I made myself a tube screamer ts-9 because I find the distortion of a little coarse marshall ... but very well qd same!

power issue, it rocks, my neighbor is sick ...
the reverb is a little discrete but more than enough!

I've had two months, I am very happy
unbeatable value for money, I had to € 125 Used but like new, no scratches or anything and I have a marshall sound is undeniable!
on the tube emulation technology, well it's not Panard. but it sounds good anyway! Finally, it is a distortion by clipping diodes ...

I would do the same choice? for an amp that is home to train and cheap, yes!
I am very satisfied

lonlevade's review (This content has been automatically translated from French)

The configuration could not be easier (from a 30 watt would be pretty stupid to get lost).
The sound is honest, though vaguely distortion lack of fishing if you want to make very fast solos ... or so you have the option to tapping. The clean sounds are indeed very clear, to tell you, I can plug in an electro-acoustic top. Good rock amp (marshall what)

It is better not to play metal with this machine, but the pop, pop-rock, rock and company get along with. Avoiding the blues, it's a massacre, the sound is too vide.je've played for quite some time with a cort m100, this may be why ...
For fun, I prefer to push the gain on the bottom, if it's still a bit tacky. For clean sounds, for against, it's perfect, especially with a chouillat reverb. Good amp for playing in his room when you have a well defined style of play ... Otherwise, the door.

I use this amp for 1 year only, and I want to sell. If he had 30 more watts in the gut, I say that I have not tried to do something more correct ... but ... If the value is honest, it ' is why I bought it. Otherwise I have a marshall 75 reverb and him, he really has what it takes where it's needed.

Marshall VS30R manuals and other files