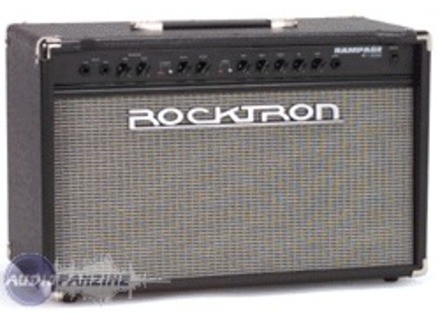 remitaz's review (This content has been automatically translated from French)

Suitable for Rock hard, especially Crunch but good for the Blues

Trs good amp technology from Rocktron. It has more depth than the Marshall and amplitude. The Stereo is really apprciable and the sound is as big as a ...
Personally I possde RT plus a 80 that will never leave me
Did you find this review helpful?yesno
»

Uder's review (This content has been automatically translated from French)

I use it for rock mtal but with pedals for even better sound and SPECIFICATIONS
but it could be used alone without a problem (I use it with an Ibanez for beginners and I get sound very successfully despite the weakness and mdiocrit of my mics ...)

I use it for 9 months

playing at home I would note that his only problem is the power
Indeed, even at least it makes a noise ...
I've never pushed more than half a can that can come out (dj that really hurt ...) I can not imagine pushing it back!

I would do ... I think this choice
Did you find this review helpful?yesno
»

bniklazz's review (This content has been automatically translated from French)

Rocktron RT120C
4
Here is a monster amp for a reasonable price 4000 francs at the time and 300 euros in argus. I bought it in 1999 and I am completely satisfied. Please note this is a high-powered amplifiers dedicated to metal for the big sound very heavy!
120 watts rms and they are there, I've never pushed more than half of it so hard, it covers a drummer without difficulty.
I will sell it because musically I want a more versatile amp less typical metal.
I would do this choice because to play Slayer, Pantera at that price is not better.