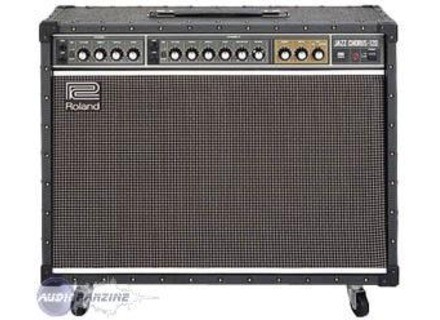 The Jazz Chorus is one of the few 1970s solid-state amplifiers from Japan that "continues to thrive," and fans of its "powerful, clean tone" include Andy Summers.[2] Summers' use of the amp in turn inspired, for instance, Jeff Buckley, whose first amplifier was a Jazz Chorus.[3]

Most models have controls based on the JC-120's standard setup. There are two channels, one clean, the other with effects. The built-in effects include stereo chorus, vibrato, reverb, and distortion. The amplifier features high and low inputs, as well as a three band equalizer and volume for each channel.
Roland JC-120 Jazz Chorus Amplifier Features:

At new these amps come in at around $1200. A little bit on the high side for a solid state amps. I have seen these amps on the used market for around $500. This is going to be for a older one which is just as good as the newer ones and really the reason for the hysteria behind the tone of this amp.

If you really want to gig with this amp then it is a good purchase, but if you just want to use it for recording a particularly the clean then save several hundred dollars and get a Cube amp from Roland that has the JC Clean. But this amp is so classic anyway that it is a must own!

Roland Jazz Chorus JC-120 (Vintage)
5
This is a pretty classic amplifier. It's been around since the mid-70s and has been a staple of the music industry ever since. It's a solid-state amp, and was one of the first solid-state amps to really make a name for itself. It's also notable for its chorus effect, which was unique in amplifiers at the time. It has 60 watts of power and 2 channels. There are controls for EQ in both channels, and the second channel has chorus, vibrato, and reverb and distortion controls. There are four 1/4" inputs (two for each channel, high and low) and there is also an effects loop in the back.

Getting a good sound out of this is great if you like your tones super clean. There are many people who really like that quality in an amplifier, and don't really want a lot of bluesy grit out of their amplifier. I personally tend to prefer a bluesier sound when playing with my band, but there are a few sessions I've played that I've used this instead, as it's ultra-smooth and great for jazz as well as lighter rock and stuff. Using the chorus and reverb (which is a nice spring reverb, by the way) is really easy as well as convenient, though you must use the second channel for these. I haven't read a manual but I don't really need it either.

I've used this amp with my Strat, my Tele, and a Les Paul, and I like the Strat and Tele the best, mainly because they do clean tones much better, and that's where this amp shines. I can also plug in a lot of different pedals and get next to no noise from them, which is nice with a single-coil guitar like a Strat. Therefore the versatility of this amp is really extraordinary. I will say that I prefer the sound of tube amps in general, as they have a lot more character, but they are limited in their applications, making this a more practical amp for somebody looking to play a lot of different stuff. With the high and low channel inputs, this also can handle some crazy signals, so players with tons of effects would do well to try it out.

I like the practicality and certain effects on this amp the best. I don't like the super-polished wussy-sounding clean tone, but I'll admit that sometimes such a sound is necessary and even superior to that of a tube amp. Overall, while I have a few beefs with this thing, I'll admit it's pretty great. It's certainly the best solid-state amp I've played in quite some time. It's a little expensive but I've certainly seen worse amps for more money.
Did you find this review helpful?yesno
»

Stoopa's review (This content has been automatically translated from French)

Scne great amp, clear and prcis enet. Stereo chorus with effect fabulous. DLIR attack and power reserved. I am sad to have had to sell it when I left for military service ...

Trs trs good choice
Did you find this review helpful?yesno
»

yanntheking's review (This content has been automatically translated from French)

To connect the characteristic sound on channel 2 with the chorus on and a little reverb, bass to maximum, and 1/4A 2 / 3 in medium and 1 / 2 in aigu.Là, it becomes magical, the sound is Crystal clear and pure slightly compressed, very spacious with its chorus of more subtle.
We can engage in the minimum distortion, not to the sound distorts, or have a slight crunch, but to give a bit of roundness and warmth. Otherwise it is better to mention the distortion.
This amp, originally designed to amplify the keyboards. It is dedicated to the clean sounds.
The manual is clear, but unnecessary. With a little intuition we get out immediately because the configuration is simple and clear.

With solid body guitars you get the best son.Andy Summers used in the Police with a Telecaster. Scofield is connected to the Ibanez. With a stratocaster, the sound is fantastic and incredibly accurate.
With electro or jazz 3 / 4 of the sound box is very good, but for these guitars it is better to consider amps most generous in the field of roundness.
The sound is never fras réglage.Cet whatever the amp is definitely jazz, very distinctive in color.
There is also an adjustable tremolo activities both in amplitude. I find it awesome and it reminds me of the turn of the Leslie

I use it since 1984. I sold the first model 1991.Je have quickly regretted, especially for its qualities of spacialisation. I bought another 2005 model, fully upgraded in terms of fixing the chassis, the reverb (quality and without parasite), breath more discreet and quality potentiomètres.Il should be noted however that Today is not the amp comes with a protective cover, very useful for transportation. Amp very strong or "indestructible." Mine was used in extreme conditions without giving any sign of weakness. It fell from the height of a chair, was used in clubs on beaches where the sand has crept to interier, was taken in the worst conditions, was shunted by handymen (and yes. . I lent to the insane) who wanted to extract more power, was washed down with beer (I also helped out of Welcome, Guest), in short, he knew all the misery and never complained.
Difficult to find more durable and reliable.
Amp with a good margin of power, even without using the power, the sound is so strange that the guitarist stands out easily.
Designed for clean sounds, it is now quite expensive.
I am separated once, but now that I have redeemed I realize how qualities are real. I recommend it for guitarists who want to think outside the box of lamps and other sounds.
I also have the tube amp worthy of the big brands, but the JC120 is the one I use frequently plud.

Did you find this review helpful?yesno
»
Read the 14 user reviews on the Roland Jazz Chorus JC-120 (Vintage) »