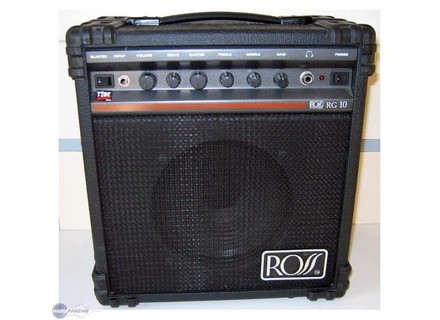 
5 user reviews
Find it in the classifieds starting at $26 Avg used price: $26

Ross RG 10
5
Bought the amp second hand; it was really old, but was in mint condition and was really great. Paid about £100 for the lot, which is an amazing price. I dont think they make these anymore, so it was great to have found one.
Was dated on the back too, 12th.June.1990.

It's immensely powerful for its size. Its an old TubeBlaster, so is really good quality too. So much noise for such a small amp!
Also it has a line out on the back, so can be hooked up to another amp, cab, or mixer.. even directly into the PA!
Good controls too; quite good control over treble, middle, bass, + the volume, drive, and master.
Ive never had any trouble from it at all.

Only problem with it is that its obviously quite old, but the quality hasnt actually deteriorated in my opinion. Also, the distortion is very fuzzy; I just plug in my Digitech RP, which is a sound processor pedal, so the clean setting is all I need really.

Its a tube blaster so its got glass inside.. apart from that its really sturdy and strong. Great because im frequently carrying it across distances.
Its got some sort of very strong plastic which is rounded over each corner, and the main body is kinda cool... its really strong but im not sure what it is, probably a mixture of things.

I absolutely love this amp, its so powerful and yet small and portable.
About 14"x13"x7" i reckon. I could use this amp all the time.

qwerty26's review (This content has been automatically translated from French)

Ross RG 10
1
10W??
and saturated clear channel manually
preamp and amp
acute, medium, severe
headphone ...
There is a light design on the box (tube blaster), but we do not care about your face ... TDA is a poor found in trade for no more than 40 bullets to the unit.

It must be suitable for the satanic music ...
In the era I was using it with a squier stratocaster ... poor guitar. Jamia I heard his sweet melody ... plus I did not play.
say that clean channel has a volume = 3 or 4, does not saturate ca ...

Shit ...
bought 11 years ago, he cram two times ... which time a warranty ... and impossible to get hold of the electrical plans. Moreover, if the ref knows qq ADD?? because the moment he walks 2 minutes then stops ... There is more support, ROSS no longer exists.
An advantage, it was the cheapest guitar I started qd.
a drawback, but I have nothing gonna change ...

For beginners, I recommend waiting qq SAVE time and buy something else.

Romain_the_kiler's review (This content has been automatically translated from French)

It is easy to use, it will not break your head to find roughly the sound you want. He protections on the big corners, so it's good if you lugs around everywhere. Lg and it is not very big.

I play sutout of AC / DC and the sound is not bad, but it's not a high end amp ... 10 watt but spit hard enough (compared to a Fender Frontman 15watts). It is not bad for a beginners, especially since it does not cost very cheap secondhand '.

I utillise for 3 4 months, I was the prt. It works quite strong (enough to piss off the neighbors in the apartment ') I tried other models before: Line6 SpiderII 212, 112 and 15 and a Roland Cube 15 "so bah quality level in comparison .. ^ ^ Small Amp for beginners .. but only beginners or even to try.
Did you find this review helpful?yesno
»

heygyp's review (This content has been automatically translated from French)

a drive of thunder

No need manual for this amp which is read from the heart!

It accepts all! Cort turns a pumpkin into a carriage fender!

choice again, alas, no longer exists and has no competition!
Did you find this review helpful?yesno
»
Read the 5 user reviews on the Ross RG 10 »