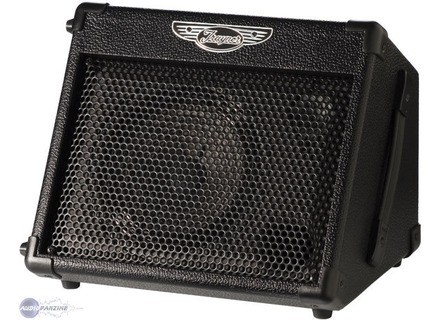 Traynor TVM10
4
The Traynor TVM10 is a small battery powered amplifier built by Canadian company Traynor Amplfication. It is solid state and puts out about 10 watts of power. It's designed to be able to handle guitar, microphone or CD/MP3 inputs and run for extended periods of time for great tones even at high volumes. There are two separate channels, each with their own input and volume control. They each share a four band EQ which has bass, low midrange, high midrange, and treble. There is also auxiliary inputs as well as a 1/4" headphone jack.

Getting a good sound out of this amp is surprisingly easy. It's only got the two channels each with just a volume control and the four band EQ for dialing in tones. However that doesn't stop the amp from sounding really, really good. I was actually shocked the first time I plugged into it. The interface is easy enough to dial in which is great. The extra control afforded by the separate midrange controls really helps out a lot as well. There's no onboard overdrive or effects like reverb or delay so you're left having to use pedals if you want versatility. However the core tones out of this little amp really are excellent clean tones, so as long as you're fine with using dry cleans or pedals, you're set to go!

This amp, though it's basically a little monitor still manages to somehow sound really excellent. I'm not sure how Traynor did it but they were able to pack a ridiculously gutsy and powerful sounding clean tone that works so well for funk or blues type sounds into such a little package. It almost sounds like there is a built in compressor or limiter that ever so slightly distorts the signal giving some great natural sounding breakup to the sound. Considering that this is a tiny little solid state amp, that comes as a surprise. Using single coils yields some great classic funk and country tones, and switching over to humbuckers thickens up to the tone for some clean classic rock type textures with a hint of natural breakup... oh yeah!

All in all I think this amp is really fantastic for the cash. They're about $170 new and to me that's a fantastic deal considering that you've got a great sounding small amplifier that's not overly loud (yet loud enough) and is portable, plus can deal with not only guitar, but also microphone and your CD/MP3 player as well! I'm definitely impressed and definitely would recommend this to someone who needs a little amp that trades extra features in on a tone that rocks.

Jebberz's review (This content has been automatically translated from French)

Traynor TVM10
5
It is a 10W transistor amp battery powered, two channels (one channel combined XLR-1 / 4) with an RCA between supplmentaire. There is a 4-band EQ overall (I prfr by between EQ but it's rare that I connect more than one instrument in both). Speaker 6 "tweeter plus a headphone jack to listen to it.

Very compact but a little heavy 12kg (due to the battery).

Only works on battery power only serves that recharge the battery (24). Damage.

The battery will last from 10am depending on the site, but I've never made it to the end yet.

I put an 8 due to the overall EQ and only the single option of eating.

Configuration very simple, it connects her or his instruments and we play the rglages are very simple but effective.

The sound is amazing, I use it mainly to play my bass Ashbory when I play with friends on acoustic guitars aplifies not (as in "party or around a campfire) or to practice home. Power is ample for this use, but to play with amplified instruments, I have doubts. With a bass, if I climb a little too much volume, the speaker does not follow rapidment and distorted, but with a more acute, no problem.

I have now for 2-3 weeks, and I do not regret my choice. This is perfect for take along during evenings with friends and not have to look current, it moves where you want (even in a cabin in the woods). For cons, I probably would not use it in a professional context. J, I tried other models of portable amps (a Crate among others), and either I did not like them or they sonority was too big To satisfy my needs. That's what I found better and I am very satisfied.