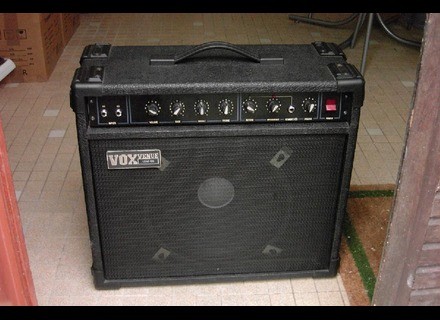 james1's review (This content has been automatically translated from French)

Vox Venue Lead 100
5
Combo with transistors 100 watts RMS before distortion. Made in England.
My model is from October 1984, the power amp has been modified as standard from 1985. The amp is a Vox model 1200, and has not changed throughout the period of manufacture of Lead100.
2 instrument inputs High / Low
2 HP
1 x DI Out
SLAVE 1 output, which I still do not understand the function and utility.
1 headphone VERY PRACTICAL.

Volume 1 input (preamp saturation)
Volume 1 output (power)
3-band EQ, but this is effective, unlike the recent combos.
1 0-10 reverb and overdrive light 0-10, each driven by a footswitch that I have not (I use a switch, however, Peavey two-button, from the Bandit112, which operates nickel)
HP 12 inch Vox designed by Fane

Solid construction (really heavy, the thing), with plastic corners. The Tolex has not ripped at all. Carrying handle.

The configuration is designed "old", ie this amp is not full of little buttons and multiple channels, it sticks to the minimum. But I like to think that the better the amp, it less it needs adjusting!
You just need to , to equalize to noon, and play. Then its ready to go.
The clean sounds are good from the start, your fingers do the rest.
Distortion requires more work, because you have to play with the input volume and overdrive.
The reverb is very very very light, I find it very incidental.
I have no manual, and found very little info about this amp, but the best manual is to play with.

I bought this amp to replace a double-JCM900 body, tired of lugging a stack and push very hard to play rock vintage felted. With a tube preamp H & K Tubeman very satisfactory, so I was looking for a combo at a lower cost solid and expressive put him in the ass, to ensure efficient amplification and present. Bet winner.
The combination is stunning: clean sounds are super bright and rich, full of nuances saturation, it seems to have played for years before, with a set that restored a small percentage of soul of my guitars. There, it responds well, a little help on the Equalisation feels immediately the notes last for hours, the nuances of the attack turn a clear transparent warm crunch.

What surprised me first about this amp is that despite its size "combo" sends a stunning volume, true to what they say about Vox, you can push the bass up to the walls without Temble hear any squealing of the speaker or any feedback. It's good stuff, nothing to say.
For cons, I usually played with Tubeman, plugged into the guitar input as an effect pedal, because not only is a nice Tubeman machine, but the presence of a non-switchable input volume by footswitch (which I did not, I repeat) prevents to establish two real clear channel / distortion. To avoid generating unwanted noise, I put the Tubeman a very small volume without EQ, and I push up the Vox 8 / 10. I also tried with Tubescreamer reissue, and it's more like lamps than any modern modeling. However, the distortion pushed fully home is really not bad, it makes a very pretty drive / crunch well seventies, which, however, tend to fade with the rise of volume. But quite satisfactory for recording.
languorous 70s.

it's QLQ months I use this combo, and I almost sleep with so I like it.
Its strength is its performance, and this is what is expected of a good amp: it faithfully reproduces the sound of guitars, is very present in a group, and loses no qualities with the rise of volume. It is very well designed at all levels, and the simple fact that it still works perfectly after 22 years of service is proof of its quality.
The other guitarist in my band uses a Peavey Classic 50 4x10 in, and we present a sound similar, except that with me there's no breath and no feedback. Before buying it, given my budget, I had the idea to find a former H & K Attax100, and I missed a Crate GX60. No regret.
This choice I would do without hesitation, and I wonder if I would be able to restrain myself to buy if I found other at the same price because I believe that 3 or 4 Lead 100 with a good tube preamp bring back the big stacks among the recent mini-amp travel.