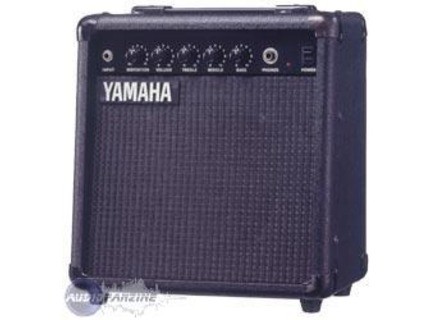 
2 user reviews
Find it in the classifieds starting at $30 Avg used price: $36

DoWn's review (This content has been automatically translated from French)

Yamaha HY-10GIII
4
A small 10W amp from Yamaha, it looks like a strong amp for beginners!

The connection is dpouillea the extreme: between a single and a headphone that's all.

an equalizer 3-band, volume and distortion with a potentiometer "on / off" switch intgrant: unusual.

It was an amp for beginners and it filled his office with a lot of goodwill.

The configuration is very simple.
Are clear is clear even at high volume: very good, for against the distortion is not great, it sounds trs trs transistors (that is, trs ugly, especially with a cheap guitar)

The manual has a résumé that is so simple to slip the beast CAN BE USED. There are examples of rglages Submitted Russian enough (as far as I remember)

It is suitable for beginners and will prove versatile.

At the time I was playing on a scratch "made in china" a horrible instrument making (which I still matter!) But with microphones correct. It sounded pretty bad.

The clean sound is still worth the time, by distortion is not against the top, but it may appeal to someone who wants a dirty sound.

I have used for .. um 3 years I think, and after I pay a Valvestate, ca has changed my life!

I tried a park that was a more beautiful sound, but that cracked me potentiomtres discarded.

Yamaha, no problem of the cot, very very big problem with never any reliability. and I carted a right to left without mnager!

He even spent four years without use, and I rebarnch hop, like the first day. it's good stuff! So, I sold it!

This is a great choice for beginners or playing in his clear all alone in his apartment. Moreover, given its age, the lower prices.

jeannoc's review (This content has been automatically translated from French)

Yamaha HY-10GIII
3
Transistor base, with a little thin voice - no hope of understanding if someone passes the suction in the next room. We are told 10W, that must be it. Limited connectivity, the lack of input or output third CD (eg to record what is playing) a little pat on the nerves after a while. Three settings-mid-acute severe efficient enough, and a horrible distortion, so metal, which engages with a knob 0-10, that's all.

It was a good basis "clean" and you can add the effects you want. I play with a double Olp musicman humbuncking HH. I avoid the distortion, I use a vintage overdrive pedal Berhinger (you will recognize the range of mowed). sure, I tried the same formula on a guitar pedal + mashall 100w JCM is another world. In fact, it delivers Record new volume, this amp does not test any config guitar effects or a little depth. It is used to amplify the signal of a solid body guitar, period.

I have 2 years, I love his portability (you can sit on while waiting for the bus, and carry with one hand), its all p'tit price, ruggedness, small size and neutral . I do not like his lack of connectivity (one amp for beginners with no CD input for playing a disc, it's frustrating), and lack of character (I had a Fender 15w which gave a bit of roundness to the sound, even low volume).
For 100 euros today? ... I would save just to buy the range just above. It gets tired too quickly these little things.