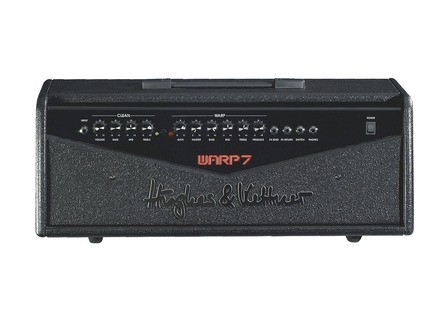 Hughes & Kettner Warp 7 Head
3
The technical specifications have evokes dj t, no need to give a layer.
I found the whole head + cab almost nine 300 euros in a cash converter, and APRS test the bug I have the home-board. For that price was worth it, but the price of nine (there are a few on the web) is just compltement abuse in relation to the quality of the whole.

Note that after various test with the head and pluchage of technical data, we can only send 250 ohms in the return of effects loop, knowing that most of pedals swing of 1000, feared the pudding.

Trs simple configuration, two channels each with a 3-band equa + prsence for lead.
The manual is not too bad but not so damn clear about the possibility of connecting the head and the baffle, which both have two outputs for adding a cabinet supplmentaire.
Getting a "good sound" is difficult to channel plutt WARP (Lead channel), the clean channel when he is really impressive, prcis, warm and bright, it is for this channel I bought this head.
I play mostly Thrash and Hardcore, a little blues.

Then they attack the Big pav the "sound". There are a few tips to know with this head I will list below.
If used as a, with the firm of origin, without effect nothing, for me the head not only worth it clean. Warp channel is really too typical and absolutely no personality versatility in terms of sound. Regardless of the rate of gain or rglages qualisation was always the same sound idendit remaining. So it&#39;s either we like or not like it. For my part, I do not like ... The attack is soft, the sound enough knobs twelve o&#39;clock bunch it seems to have an al legalization V with less than zero-mdiums. If we try to redress (always with the equa Warp channel) by adding medium and treble, the Grain Exchange. Trs bad point for me.
Can not rgler rate saturation for grain size and to correct all with four. We must constantly juggle.
The rel intrt of the head in the channel is clear, use your effects pedals and other distortions. L ok, although the receiver transcribes the dynamics of gear used and the sound of the instruments.
I did a little test and Discoveries dernirement with my distortion pedals of lamp (Guyatone Metal Monster) by plugging directly into the return of the amp, instead of the usual input e instrument. And I took a terrible slap. Used in the instrument between her oats dj not bad, but it was felt that the amp bridled a little performance of the beast. Directly into the return, the sound is much more truly free rponse and dynamic, there is no such espce "envelope" that gche chouilla a whole. As a branch, we use here that the power section of the amp, more pramp more than four, more than master. RULES Everything with the pedals. For cons I found the problem of high-volume clipping for the note, the problem of precisely 250 ohms max send in return, and my pedals sends 1000.
Related problem here:
And I tried to compare the two modes, why there was an envelope with tufts between his instrument, and its free use in power amplifier pure.la PART ONE of rponse is explained in the link above (Mismatch of impdance-> cutoff at low frequencies and high added mdiums) The second part of rponse is here:
APRS comparative fit test of prampli, the knobs of qualisation only add color, you can not subtract. Knobs you thought you had MIDI in clean sound "natural" of the guitar without coloring? FALSE. You need to have the knobs 0! and yes! just the bass and treble from 1 e t2 if you really want to paste. L was the same sound reproduction than through the power amp. This is simply crazy. Discoveries that allowed me to return to between instrument, four knobs to 0 to get the sound I dbrid in return, and more clipping problem seen I&#39;m "normal" use of the amp. The four is made with the pedals, which has enough to grate rglages carefree.
Another point that adds +: rgl balance as the amp has a lot more sauce, it does not add forcment coloration in the sound is more prcis, a lot less spit , I record down two points in the master RPET.

The CABINET H & Q: More than average! the original HP (celestion rocket 50) are largely responsible for this feeling. Too low, not medium or low trs, a crunch and crunch even distribution of acute bad room, dynamic mean really ... But why they put the HP??
Test with a peavey 6505 and the firm is carrment another world. With type 0 rglage of four power amp plus Guyatone lamp bah I really do not shut away from the head 6505 precisely, the sharp dry cot full of mediums, with palm mute sending the pat and dynamic, a really excellent precision.

So yes you can get a good sound with this trs head, but for the picky like me, have asked me time and investment parallle (distortion pedals of holding the road, changing or firm carrment HP). The cost is good with the amp bought used, but if you do not want to break the head, look elsewhere.

Used for almost 6 months now.
I have not tried before masses of MODEL, I stumbled upon it and as I had just an amplifier that can send watts I would say that a good beginners.
The particular feature I like most: trs good pure power amp which restores what really gives it (see above rglage)
His other good point is that this amp is really a tank, the indestructible beast. it adj taste the beer to the ashes of cigarettes and other joyeuseries, even a connection made by another guitarist who had shunt the two rear outputs together and balance the sauce ( do not ask me why ...). Bah not report it still works as well.
The particular feature I like least: The channel WARP, the knobs of four that are "add", the HP cabinet.
Report good quality secondhand prices, nine let me chuckle ...

angelpro's review (This content has been automatically translated from French)

Good enc clear we move the lens to the hushed lourdos
regarding the RESERVE disto big metalheads! is anything but a sharp disto pluto kind I use Boeing 747 ever

Frankly should not it their is a half stack or the cabinet is 2 * t ^ te (because the HK baffle is the killer!) I recommend this amp if they have a rack right behind pti ( I've got a silver dragon and zoom G8 serves me preamp and comp)

Finally this amp a hit but then buy the board with a zoom G8 and remade the equalization and you sound ultra malleable (that is very simple I play funk + heavy rock of the trash ...) and after spend some tps (on equa), well you get a personal sound that quickly and do not have the other amps, the power is exploitable in the low bass without a repeated even move! So here lol for the register is the base metal
Did you find this review helpful?yesno
»

Subjective approach:
The closer the Warp7, the more you want to avoid it. His apparent lack of robustness, its cheap plastic, its little red light "Jacky" in the middle of the mouth are all characteristics that are scary. No footswitch is inexcusable, even for a head of the Third World!

The knobs are a classic touch.

[1] This amp is assembled and the only thing I can find him (the price from below).

Avoid carefully the effects loop, more decorative than useful, and that tends to alter the sound. If you have distos effects and is input it will insert them.

The knobs turn and allow themselves to do their job with a good progressive (we might have expected worse).

Channels are viewable and handling of this material is easy.

The amp is easily damaged during transport often. It is therefore preferable, when mounted, to leave it where it is!

The lack of a footswitch request sprinting at each channel change ... bouhahahahah!

The reliability of different amps observed was poor.

[2] A head for use ... no more. No extraordinary specificity is present but lacks an effects loop and a few really usable controls for awesome sound more diverse. Which would have allowed to slip into the average.

The clean is interesting because exploitable. For funk, reggae or derivatives, it shows a beautiful shine despite the lack of depth of the latter.

As for the channel Warp. He is honest without being able to climb in the average market heads. The crunch is nice, the dynamic is nicely done but, here too, the body of the instrument is not always respected as it should. I also note, according to the heads, the differences in their adjustment to equal. Not really surprising for a head built in a hurry!

[3] in general terms, the sounds are usable and better than all the first prizes in transistor amplifiers. You can also use this head as a basic distortion pedal. Significant staining (read "infidelity to the instrument") is not surprising in this price range.

The resale value of this head is about 200 euros. DO NOT BUY FOR MORE, because it does not apply! This is an entry level amp that has the merit of any defense at his request but there no more.

Reliability style "new Marshall" is disappointing and I would recommend to anyone looking for a head exploitable in the long run this turn to other competitors.

Legado's review (This content has been automatically translated from French)

it has to happen next in the association and I OCCAZ essyer repeated in a cabinet Peavey guitar with various JS
For the settings I use the channel to saturate the clean and really top
gain = 5 bass = 5 mid = 6 tbl = 6 = 7 prs
c the rest of the finger and the RPP knob who manages
I play blues rock arpeggios, neo classic, funk and metal
ca is an amp and working with a multi-effects rack piti was fairly full sound

Note: Those who complain that the lack of reverb should know that currently no head worthy of the name does not have reverb because nobody on stage (or studio) does it serve ... that's why the gods a multi-effects rack cre ...
to have a reverb buy a combo

I use it for 5 months I believe
I have a ridiculous weight up and moving without thinking
as I take care of my stuff (bah if your tune you do not blunder)
I just not say whether or not solid c
Note that the show's reliable enough for c equal to one room to another
a bit of balance to
I play a 5 volume rarely more then enough power I guess
The value for money of OCCAZ is good but if not be better to lead FAU til ver a valve king bocoup nicer but more fragile.
c repeated a good amp for those who can control their sound and dea ki utiliseron a Bafle other than HK
Did you find this review helpful?yesno
»
Read the 6 user reviews on the Hughes & Kettner Warp 7 Head »