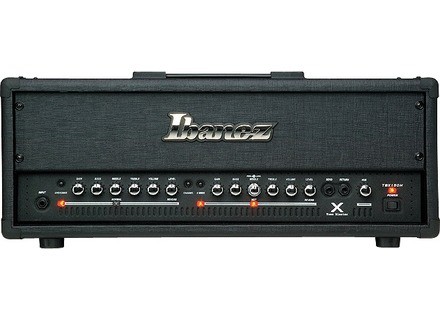 Ibanez TBX150H
3
Ibanez is really known for their tube screamer petals and they're very inexpensive and versatile guitars. They're not quite as known for the amplifiers but they do make some very inexpensive amplifiers for the money. This amplifier is known as the tone blaster extreme guitar amplifier head. They're rated at 150 W and they have two separate channels. Had basically no more clean channel and then you have a hot ride high gain metal type channel.


This guitar amplifier can get some decent tones for the price but it's not to be any type of their musical amplifier that you get from a Fender or Marshall amplifier. You have the basic EQ section of game, bass, middle, trouble, volume, and reverb for the clean channel. On the high gain channel you have those EQ sections as well as a push poll type of separated control in the middle position that give you a hotter level control. You also have a couple buttons to click for even more game such as the X mode. One thing I don't like about this guitar amplifiers yet to send in return effects levels on the front panel the amplifier. I never like this on any amplifier and I know the PBS done this in the past. It seems to clutter up things in the front a lot more.


At new you can find these amplifiers for right around $250 which is a great price for someone starting out in the electric guitar. You can't find a lot these days right around this price you can get 150 W high gain amplifier that is great for anyone learning how to play the electric guitar and needs multiple channels. It's not a boutique amplifier and certainly not a very well-built guitar amplifier but it will get you the tones you need any very inexpensive costs.
Did you find this review helpful?yesno
»

Ibanez TBX150H
3
Ibanez is a great company that makes very useful products that not only cover guitar amplifiers, but also pedals as well as guitars. Many players from all around the world has player or has used an Ibanez guitar at one point or another. I can also bet that everyone in the world whether or not they have known it has heard an Ibanez tube screamer. This pedal has been featured on countless albums and touring stages for decades now. So if you tunr on your car radio during the day the chances are you will within about 5 minutes hear an Ibanez tube screamer. They make cheap usable products for the budgeting musician.

This is a solid state amp that has no tubes inside. The tone of this is going to sound squashed and processed but some people like the sound of that. You will hear some very extreme gain tones and a decent crunch tones. Most f the amp is built around the extreme gain side of guitar distortion. The distortion has a thick meaty voicing but not really my style. You can get the thing to squash and compress very easily but that doesn't always work in a band setting.

The amp is a two channel amp that sits on 150 watts of power. That is a tone of power for a solid state amp. The tone is not going to be a pushed tone and tube punchy but rather just a tone of preamp distortion. This is not going to have that airy rock power tube breakup but just an overly process preamp loads of gain thing. Again, some people like the sound of that and some do not.

At new these amps come in right at around $250, which is a great price for an amp of any kind. That is just about double what the price of their pedals come in around. So the price of this is an easy buy for most people. Not my kind of sound as I like a good tube punch in the face and using the power section with the preamp section for some good clean gain.
Did you find this review helpful?yesno
»

Nothing could be simpler, and it connects yay

Sound suits me very well, I play metal and this amp is geared toward that style. clean sounds ranging from crunchy crystalline depending on the setting, the distorted sounds are very varied according to the equalization of mediums: you can either dig a frequency, or boost a frequency medium to put ahead in any case it very 'guts'!
with less than perfection would gain should be rock 'nervous' ^ ^
I was very surprised by the sound quality clear, as by his power.

For 1 year and a half
I tried many amps before, but in this price range is this one that convinced me.
Certainly between a head with 40 lamps and this one, unlike his is flagrant, but hey you can not compare a city and a Porsche either!
if not for my limited budget I was not disappointed!