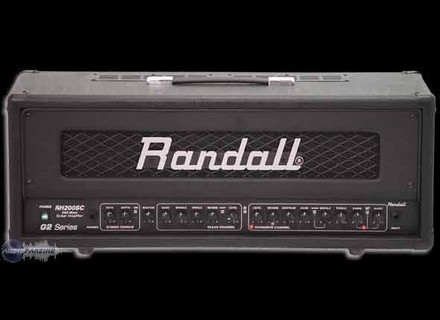 Randall RH200SC
3
Type: Amplifier transistors in 4ohm 2x100W, 2x50W into 8 ohms.
Connectivity baffles: 4 inputs in 2 4ohm speakers and 2 8ohm
Fx loop: an effects loop with send and return of CONTRL
Channel: three channels: one clean, overdrive 2's. clean and crunch channel possdent a spare legalization (bass, mid, treble, presence). However, the crunch channel, it has only two knobs and legalization of gains for the gain rgler SPECIFICATIONS.
A switch (or footswitch) to switch from one channel to another and from one another overdrive
Footswitch: Optional provided
Other: Line out and prsence a chorus and a reverb spring neither good nor bad.

[5] On paper, the head of what to give. But to be in the top rankings, it lacks a qualisation spare, a footswitch and possibilities of SERIES noon.

The configuration is simpler than some heads. Can be found quickly INTERESTED sound, especially clean. There was no manual.

The problem is here, a lack of fit between the clean and overdrive (jumps in the levels of important volumes) and the lack of a spare between the four channel "Gain1" and "gain2" which makes for difficult rglages.

The effects loop looks like a dcoration because it grows out of breath and sound that connect a ds effect.

The robustness of this head is any evidence. I was hanging my first concert without flight case, rain, snow, wet streets in scnes or on boiling. Sometimes limit the carrying of common sense or under the influence of products making the transportation of such a device even more Prilleux. She has always fulfilled its mission Fidler.

[3] Here, randall will still work. But the head of the discharge to include it as a head which is silent for NEWS-decade ago.

Here, fans of Dimebag Darrel will get their money.

If it is true that the RH200G2 and G3 are more versatile. The Randall RH200SC possde the transistor distortion "vintage" who made the reputable brand. The sound is big and full without being very bold and sle. The attacks are prcises, the overall sound is dense and harmonics well transcribed all earnings levels. As I said above, the sound of Darrel beginners Panthera lies also in the head.

The clean is a real rvlation. It is clear with lots of shine, but parralllement, with a round seat. With good rverbration and a beautiful guitar, you cry! I guarantee! But it's not a clean blues with a little crunch. Here is clean = clean clean.

[7] A head who has a "little something that makes ..." and we can not explain. Less versatile than its big sister. It seems more raw and authentic.

I used this head up rcemment. I pass a small fortune collgue wanted s'entraner home but had no hardware.

I pass rcemment a Genz-Benz and I must say that if the sound of the Genz me much more flat, I regret my old randall ct for its "big balls".

Currently, it is possible to find these heads in a good state trs Internet ridiculously low prices. Take a look from time to time, it's worth it.

[6] A head that possde attributes and that, even if it does not inquiter the REFERENCE of the moment, has a sturdy characters. I was more a relationship with the head particulire ... sic

le grogneur's review (This content has been automatically translated from French)

Nothing more simple, and it sends you plug the chip!

Very easy to adjust, and can have big sound very quickly!
There is no one Pelet de pots to grind, so his sound is found quickly, both in its clear that saturated

I mainly of metal (death) ... The saturated fat is good, big sound very clean, but for me it lacks a little EQ as the V2 to tune, but considering the price, you can not have it all.
Adding an EQ (for me an MXR M108 10-Band) brings a lot: more attack, and a more sharp! With the MXR, the saturation is enormous, yet clean and sharp!

I was playing (there are some times that) on a JCM 900 head and metal area, and I find randalll much more powerful, big sound that was heavy and clean.Moi follower amps lights, I must admit that my head réconsilier with the transistor!

I was very pleasantly surprised by the clear sound that is crystal-clear (I play with an Ibanez Universe 7-string steve vay) ... The chorus is a little more, though not fantastic, it brings a little heat very nice. A small delay is over I think to bring something really nice. However, it is true that I use mainly saturated ...

I use it for 2 months and I am very happy considering the price!
Never tested in live, however, it seems very robust.

It's a head I would recommend for zicos who have not a lot of dosh and above which the metal, because even if the clean sound is pretty cool, it is not appropriate especially for the rock (the transistor provides the too "clean" to saturation), let alone the blues ...

Finally, for this price, you can not find major fault! Perso j'adore!