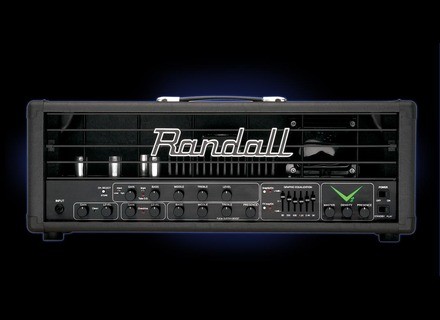 herrtyrant's review (This content has been automatically translated from French)

The connection is as follows: -2 HP output.
-Send and return with two volumes (one send and one return).
Full-range output to
connect directly
a sound system (or a second v2).
-Midi output for
switch.

There are 3 channels-clean, overdrive, distortion (with swicth attack and brigth) with separate settings for each
-A graphic equalizer
A volume-density and general presence.

The pedal command: clean it, the od, the distortion, equalizer, effect loops.

in terms of the manual is in English, not knowing the language I managed in my experience.

the clean sound is excellent when the od I do not use it.

My style of music is the black metal and death metal, it suits me very well because for the first time in 13 years I could get rid of my many multi effects whose settings are very demanding, so thank you RANDALL.

I use an Ibanez 7-string guitar pickups with the prestige of origins (which are excellent by the way) but I plan to mount a Seymour Duncan SH-5.J 'also uses a noise gate compressor alesis 3630.
To set a good death metal distortion to use the channel with the switch to attack, gain 2 / 3, Bass 1 / 4, middle1 / 4, treble 2 / 3, level 2 / 3 and switch off the equalizer at the bottom of the 3 buttons in the middle, below 0 to the last button on the left and right before last, the far right leave it at 0 and there is happiness ASSURRE

Using the pedals can store the settings (equalizer distortion and equalizer with clean cut, for example) twelve o'clock sharp the switch

I use it for 3 months and I already live with one.
I like the compact size is quite small compared to the v-max distortion is excellent.
However there is a big downside: when snoring is over 2 / 3 of winning and that is that we need its capabilities (compared to the v-max is very quiet) damage.

Randall is a very good compromise, at value for money, for those who can not afford to invest in mesa and correct to engl 3500frs ((hp) that are prohibitively expensive in my opinion

I would do if this choice? probably.

Chris.F's review (This content has been automatically translated from French)

Randall V2
5
- Transistor amp with tube power amplifier (MOSFET), see Randle, everything is in more detail.
- Power = 400W @ 4 ohms, 280W @ 8 Ohms, 500W @ 2 Ohms
- Connections: jack in / out mono line, slave in / out and simulation of body with an output "Mic Eliminator" in jack. otherwise midi in and thru for MIDI and pedal external midi controller. and an effects loop with switch to set it in / / or in series (depending on the effects used in the loop)
- Settings: the classical gain / treble / bass / middle / large over a 6-band EQ switchable powerful, more settings to boost the OD transition, and settings of attack / boost / presence and density ( extreme low and high frequency) to the tube distortion ...
- Effects: a large transparent EQ but not at all neutral when triturated, powerful switchable pedal and assignable by the troix channel (clean / OD / tube)

brief is really full of features and really useful little gadget on the modern mind, and sculpt the sound is really fun fast easy and intuitive once flown over the doc. I put 9 because it is very comprehensive and modern ergonomics and foncionnalités level.

- Could not be more simple
- To have a good sound, read qd even the doc to get a glimpse of the beast and not make mistakes like balancing the gain of the disto-bottomed tube for example (I did cettte was an error, before I &#39; was a small combo marshal ("ROOH the newb")! ditto for the EQ bands ... basically it does not boost too because no adjustment V2 released soon bcp power ... However, two good hours of testing and you have the sound of your dreams ...
- Manual very clear and explicit, in English, but the right words are well chosen to explain the philosophy of the unit.
- So I put 8 in the manual non-localized ...

- I play with a brutal Death grateux has a mesa rectoverb, the sounds are very complementary, but in terms of power, there is no problem: no one covers the other, the V2 can compete or easily crush a mesa in terms power / gain, and low (yes the old squabble of grateux

. So personally it&#39;s a sound that is not customary in the death, and all the better, I love the big rhythmic serious and heavy sounds powerful and well-granular type power / hardcore / neo, then repeats it in tears all: the bass is huge and precise thanks to a gain and an insane attack and very tight, the mids stand out equally well for speed melodic passages a little "black", and the distortion is very clean tjs if you do not put too much gain the distortion (c maxwell as a single spoon is enough ...)

- I play with a barritone epiphone (les paul shape) (the black with the red spot) and a micro dropsonic DiMarzio DP (in the bridge position), and a body ENGL 4x12 XXL ...

- Bah roughly the sound balance to death both in transient distortion is dry: RANDALL THE DISTO or lamps, so hybrid (more fat with more body and more heat of course), but always an attack very, very tight, stressed my body is very tense in the attack and the grain, I tried a large firm and a large cabinet marshall mesa (dsl I know the ref) but the ENGL XXL bcp is drier and more accurate I think ... in short a combination of death!! the clean is really super nice too, very precise, very nice attacks a little crunchy qd we push a pe gain, the worse a nice warmth of its well-rounded in the lower, the highs / mids are doing well also .. . it&#39;s really versatile short, even if hey, you&#39;re with friends, we will not s&#39;mentir, we seek the nag, the fat, fat .... but in good taste and quality as it is even qd gentlemen!

- Bah of Coupo I love everything about this head, oki c not very objective about his amp, but it really disappoints me on anything! So a nine (not ten I put in the form ..)

I&#39;ve had a good month, I tried qques body forward, but only after a good adjustment session that I discovered all his little tricks and his own settings ... the MIDI foot controller is configurable (can combine its settings canal + + EQ FX loop, and save 5 seconds by pressing one of five buttons short ... very instinctive.
I love her very typical randall, and hybridization really works perfectly, so I hear tt the world tell me that the hybrid is the m. .. ! I&#39;m just trying this head, the sound is innovative, modern, powerful, tight and really clean, in short I am a fan and I would not trade for anything in the world against an all-tube ... after all it&#39;s like is a question of feeling, taste, and musical references

- So obvious value for money is quite correct, in this range are still facing the powerball and other post again c just a matter of taste.

- Yet I have not tested live (fireproof) I have not obviously worse bcp back (still in the euphoria of discovery), but it is good enough to go to configurable any good guitarist Research GROS, without hesitation two bricks in his head ... at least I&#39;m not disappointed, and encourages all grateux "metal" to test (even if it becomes very hard to find in these times of shortages), to change their minds about the good old squabble "lamps vs transition" ...

In any case, I am thrilled me!

Seratoth's review (This content has been automatically translated from French)

Randall V2
5
Everything has already been said.

We easily obtain a good sound? Um is a randall, not a marshall ... Of course that you get a good sound. Plus a multiband equalizer integrated requested by the peulpe? One small problem though, the breath. When you put the gain back, it blows so much. I set it to one-half and the breath disappears while keeping saturated fat, which is enough to make black metal.

This amp is well suited to what I was looking for. I also corrected a mesa 50W. Randall has compared the sound less "hot", but more suited to my style. To play only the sound seems to some a bit "flat", but in groups, this amp is immediately instead.

I've had five months. I hesitated at first between the Randall V2 head and Laney VH100R. But the integration of an equalizer made me look for Randall. The quality / price ratio could not be better for someone looking for a powerful header metal.
This choice I would do without hesitation. All I need is to buy the cabinet, marshall because my body is suffering a bit with this watch.
Did you find this review helpful?yesno
»