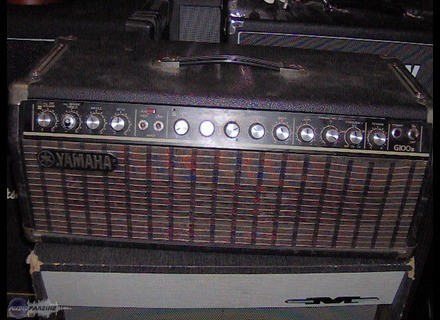 Yamaha G100 II
4
Tete a transistor called the 250w though I highly doubt it.
With two channels, one clean and one distortion.
It has a 3 band EQ per channel doing their job and nothing more.
Voicing an overall effective enough, common to the two channels.
A great spring reverb

Basically, it's not difficult to adjust, trick only two knobs "aviator", that 'It is not forgotten (the clear treble sound and especially "more gain" of the distortion channel I believe). Eqs are a little temperamental, and voicing is sometimes a bit frustrating. Overall nothing insurmountable. Overall

get a good clean sound is fairly simple. The spring reverb makes me crack. Conversely, get a good sound distortion is more or less a miracle ^ ^ Let's say I am not able ... along the side eyeing my search distos large, and not light crunch, I can only say that it is not metal. For cons, I highly recommend a clean transistor + spring reverb roland jazzchorus way. In addition, the voicing and eqs individual is by its very "workable" and that different sounds are distinct entirely possible to make. Netherlands, deaf or slap, she has lots of sounds.

Although at the base, this model is very costly to its release, it has plummeted to the argus terribly. I bought it by chance (often the fate that can buy this kind of head ^ ^) pretty cheap ... I saw him move to 50 balls on Ebay. Frankly if it's in store, you got a mono channel distortion (kind JMC) that your group started doing ballads, an AB box that is useless in a drawer, bought the well yeah ^ ^

No kidding, I have not many arguments for the buyer

but I have no reason to sell either, it sounds clear channel transistor has a spring reverb and accurately adjustable, I care

( and it's not like I had no other heads, though) A good clear sound
Did you find this review helpful?yesno
»

jacqn's review (This content has been automatically translated from French)" I have one too: D"

I bounced off the previous opinion, the only one thinking in the world to still have this head: D
I acquired it in 1979 with a 2x12 "120W Yamaha (the amp is a 100W, I confirm)
my cousin had bought the year before the combo, he still
I stored for 20 years in an attic, there was more stuff that worked on channel 2 even though he was never carted in concert: ((and I stopped the Great)
I emerged 5 years ago when I took the guitar, cleaned and resoldered a piece of broken board, and it works again for 1 / 2 we say
and then one day, using it for the song, he gave up the ghost - I tjs, but in the basement of my parents; D
Briefly, I confirm: very nice clean - the channel distortion is not bad but really rang the 80, so quite outdated
I'm more solid and indestructible, but my experience has proved otherwise
Did you find this review helpful?yesno
»