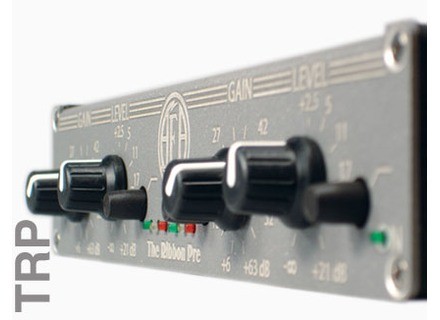 AEA TRP ribbon pre
5
The AEA TRP Ribbon Pre is definitely the only 'ribbon only' mic pre that I've used, or even seen for that matter that I can remember. The TRP is two channels that each have XLR and 1/4" inputs and outputs. This is a very compact preamp and won't take up a full space in a traditional casing, as it takes up about half of a single space.

There isn't too much to know about the AEA TRP Ribbon Pre in terms of using it. Each channel simply has parameters for gain and level, and then there are buttons for a high pass filter and polarity. It of course doesn't have phantom power since that isn't needed for ribbon microphones and would actually be detrimental to the mics if used. A manual isn't necessary at all for the TRP.

While it would make sense to use the AEA TRP Ribbon Pre with an AEA ribbon mic, I've yet to have the chance to try out this chain. I would imagine that this would be the best use for the TRP since gear made by the same brand usually works best in tandem. However, the TRP sounds great for recording with a Royer 121, and I would bet that it would sound great across the board with ribbon mics. I've also used it as a stereo coupling with the Coles 4038 ribbon mics, which were also a great match. Since the TRP is designed for use only with ribbons, it gives you more than enough head room and picks up all the details that you would be after with a ribbon mic.