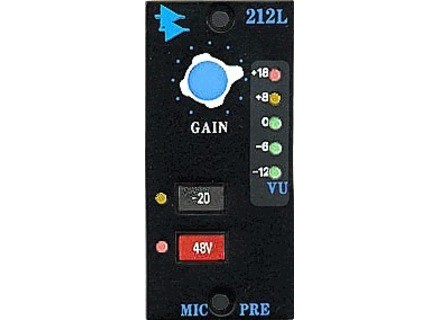 API Audio 212L
5
If you want a Pre Amp that has massive head room and sounds so clean it will blow your mind, then buy API. API is a the industry standard in the larger studios such as mine. This unit is used daily on every and any instrument we record. We always turn to API. API on vocals is a must and on kick and bass. No other pre amp has the headroom and sound of an API. To use an example, we have a great deal of pre amps both new and old. We record everything from bands to singers to songwriters to major records every week of the year. If a drummer is in my room we use the API for kick, snare and bass as well as all our vocals aside from vocalists that need compression while recording live. It has 48V, Pad, very sturdy. On the input stage I usually red line the signal into the unit and I never get any distortion what so ever at any point. I can literally have a kick drum microphone red lined on the input stage and I don't get any distortion into Pro Tools. Same with vocals. I always input vocals very hot into all my pre amps but none can take the high gain inputs that I like to use better than the API. I also like the sound of API more than any other Pre Amp on the market today. It just has such a strong sound. The -20 pad is useful for kicks and snares and we rarely use the pad due to the input headroom.

No need to complicate a pre amp. Set your level and record. There are balanced inputs both line and mic and both sound great. All discrete and it has a great reputation and a great resale value. API has the best resale value of any pre amp you will buy. Most people don't sell their API pre amps unless they are getting out of the business. I have seen some of the older ones get far more than I expected.

100 % transparent and clean. API does not color the sound in any way which is what you want when you are about to spend the kind of money that it cost to buy this pre amp. The sound is clean and transparent and the bass is not enhanced nor is the top or highs or high mids. I can rave enough about why you want to own an API. I like all of their pre amps and have never been into in big time room and they don't have API as one of their main pre amps. It is a universal pre amp that sounds great on any and everything. if you listen to records you are listening to API probably on most all of the instruments recorded. If you have every had the pleasure of working with an API console you will know what I am saying.

I have four of these and they are absolutely the best pre made. Kick drums sound so fat and have 10 db more headroom. I red line mine all day with zero distortion. I know the API reputation so I did not hesitate to buy all my API pre amps. It is the most reputable company around and it is an investment in your studio and shows you know waht the best is.

API Audio 212L
5
This is an API mic pre. API tends to make universally awesome gear, and their mic pres are top of the line. This is basically a stripped-down version of one of their 512 mic pres, which are arguably their best-known pre. It's a solid-state pre, is all analog. It's got an XLR connection. The unfortunate thing about this mic pre is that it isn't rack mountable, but it's small enough that that shouldn't really be a huge issue.

Using this mic pre is pretty easy overall. It doesn't have many extra features, just the pre, an input gain knob, and a -20db pad. The most obvious thing missing from here would be a phase reverse switch. However, since the vast majority of users are going to be using a DAW, you can switch the polarity within that DAW if necessary. Thus it's ultimately avoidable, as hardware polarity switching doesn't have a much better sound than digital.
The setup of this whole thing is really stripped down and simple. I didn't have any problems with it, and I wouldn't need a manual.

This is a really fantastic sounding mic pre. It has that classic API sound. Clear, full, and just warm enough without coloring the sound. The pre is the very definition of transparent, and doesn't lack in warmth and fullness either. You really don't need much else in the way of features here, sure there is no compression or EQ but if all fails you can use the DAW for those things. This pre can be used for just about anything. If you have a decent mic collection your tonal capabilities are quite varied with this. It's equally good with dynamic and condenser mics, as well as ribbons. I think the best results will come with the best mics, so don't get it unless you have a good enough mic collection to really make the most of it.

Overall I think this is a fantastic purchase. It's got everything you need and nothing more. Sure, it has fewer features than the full 512 but it's still got enough. For somebody looking to upgrade their home studio, this is a fantastic option without being too pricey. It could even work in a professional studio considering its quality. Overall, you can't really go wrong with this at all.
Did you find this review helpful?yesno
»

API Audio 212L
4
The API Audio 212L is a mini microphone preamplifier that is a module for a 200 series rack casing. The 200 series rack is a smaller, less popular version of the incredibly popular 500 series casings. You won't see this mic preamp around too much, but it's got the same sort of sound with less features at a cheaper price than the 500 series modules. This is an analog module that isn't rack mountable or usable outside of a 200 series lunchbox casing which includes XLR jacks and a power supply for all of the modules in it.

Using the API Audio 212L module is incredibly simple. Even if you aren't too experienced with mic preamps, this would be a good place to start since it's so simple. It's really small, so it's understandable that they wouldn't have much room for features like on some like a 512 module. It's just got a knob for setting your gain and buttons for a -20 db pad and +48 v phantom power. I haven't had a need to check out the manual and probably never will.

Don't be fooled by the smaller stature of the API Audio 212L as it's definitely got the clean and classic API sound. The only feature that it's really missing is a phase switch, but while using this you can just reverse phase within your DAW if necessary. I haven't had a chance to shoot it out with something like the API 512, but I would bet that the sound would be pretty close if not exactly the same. I recently used the 212L at a studio that had a full rack of these and other 200 series modules. The preamp is definitely suitable for recording across the board, as it's got that clean API sound that is definitely applicable to any and all applications.

Of course when choosing the API Audio 212L you aren't just choosing this module, as you need to commit to a full rack of 200 series modules really since you'll also need the casing and power supply to run this or any other 200 series modules. There are a lot less options in terms of modules in the 200 series, but the trade off is that they're also less expensive. If you're considering getting an API lunchbox rack of some kind, I'd definitely encourage you to check out both the 200 and 500 series options to see what will work best for you...