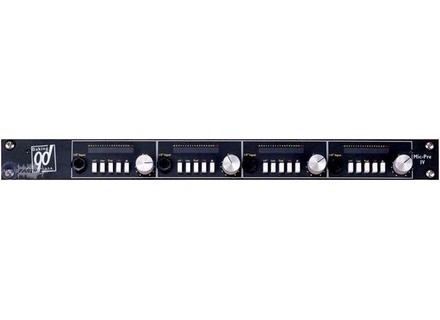 Daking Mic-Pre IV
5
This is a 4- channel solid state microphone pre amp that is made by Daking. While not as well-known as a API or SSL, they are certainly a quality company on par with those two. This mic pre is a perfect example of their mastery of craft. It's a solid state analog pre amp so it's got a great sound for certain things, its definitely not as hard as a tube pre amp would be, but that's good because sometimes you need a harder sounding pre amp. There are XLR connections in the rear of the mic-pre, which can be hardwired to a patch bay for ease of use in the studio. There are also 1/4" connections for direct entry which are located in the front on the face of the console.

Using this mic pre is about as easy as it gets with mic pres. There aren't any compressors or EQs built into it as it's a simple mic-pre. Therefore it has a pretty basic functionality. There is a knob for input gain. There are also five switches, one for 1/4" input, one for the mic line input, one for phantom power, a -20 db pad and one for phase flip. Using this mic-pre is really simple if you've used API mic pre's or others like them. I haven't used a manual for this mic pre but I didn't need one as I knew exactly what I was doing.

This is a phenomenal sounding microphone pre-amp. I'd really have to say that it's one of the better ones I've used for the price range. It's up there with a lot of the other stuff that I've used for most of this stuff. It's got a really transparent sound that really hits hard and has quite a clear, intense sound. Of course, this is what you want in a mic pre quite often. If you have a high end condenser mic, you will get a clear signal with a lot of detail, whereas if you are using a tube mic you'll get a fantastic warm sound. Basically the mic pre is as transparent as the microphone you are using. Pretty quality overall.

I really like the sound of this mic pre. Considering that it's four channels, a mic pre of this size is really great and really only comes out to about 550 a channel. With API single-channel pres going for at least 900, this is pretty great overall. With a fantastic sound and a reasonable price, I would have to recommend this highly.