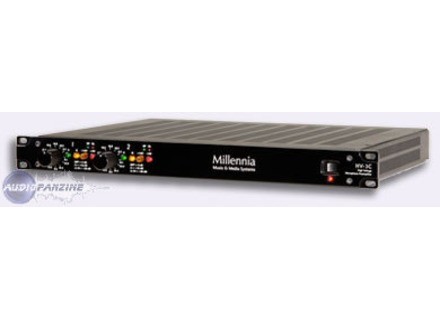 View all offers for Millennia HV-3C »

Millennia HV-3C
5
The Millennia HV-3C is a solid state, dual channel mic pre-amp.  It is quite basic in its characteristics, but is an analog unit that is rack mountable and will only take up a single rack space.

Using the Millennia HV-3C couldn't be any easier than it already is as it simply has the basic features needed on a pre-amp.  Each channel has knobs to set the level that have markings on it so you know how many db you are at.  Both of the channels then has a series of buttons for pads and boosts as well a for phantom power.  This is pretty much all there is to the Millennia HV-3C, which is nice because pretty much all you have to do is set your level and you are good to go.  I've never seen the manual for the Millennia HV-3C so I can't say how well put together it is, but it is easy enough to use that you don't need one in my opinion.

The sound quality possible with the Millennia HV-3C is up there with the best of them.  This is just about as good as a pre-amp can be without having tubes in it in my opinion.  These are some of the cleanest pre-amps out there that I have used and they are suitable for pretty much any application or instrument you'd want to use them with.  I usually would use them for things that I would want an absolute clean signal and save the tube pres for things that I would want a fatter, warmer sound.  You can't go wrong while using the Millennia HV-3C as these are really top notch mic pres.

I've only used the Millennia HV-3C a number of times as I don't own one and anytime that I have the pleasure of using this, I take advantage of it.  Of course since this is a top end mic pre the price is pretty high and these are mostly seen in professional studios.  This being said, the price is actually pretty reasonable for two channels of a top end mic pre, even if that still means that it will be out of reach for most studio owners.  However, if you are a professional studio owner or engineer and are looking for an awesome set of solid state mic pres regardless of price, the Millennia HV-3C is a great way to go.