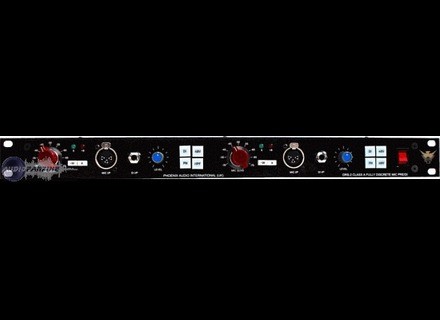 Jay Wolf's review (This content has been automatically translated from French)

Bought in 2005 at the epoch Audioland 6 mos even when waiting! Not the fault of the Innnarable Francis Mandin, but success requires! you see you often used??

Plug and Play .... Everything!

I save it on my home studio (see the stuff you could say project but I'm just a little while adoring fan of the same the sound) I was saying, you save a friend from a group well known (Zouk machine) and voila the verdict.

It is always good to remember that a good decision is first a good voice and APRS only a good voice string in this case: U 67, Phoenix DRS, Compressor: I even finger on fader, lexicon 480 and L IZ Radar 24 track killer absolute DTD + convertos

A voice worthy of an album Power station once all the rgl recoute becomes an absolute pleasure and a warm voice with all the nuances Submitted magnifies!

At the diffrence of a GML or Millennia DRS 2 is not transparent. It's a hot lamp velvety it feels to hear with my config and the voice of Dominique voices of the first albums Whithney Houston PERIOD 87 91 A universal sound of beauty and the gance prt be directly recorded.

States with Russ Long's super Ing said that the DRS is similar to the Neve 1081 pramp nice!
Anyway it's a killing IDPs are staggering and rather than risk buying a 1073 vintage or otherwise resold by unscrupulous people Have a look at who you know. Listen to the Order and the Rgalez you! PS: I know that is powerful but frankly protoolscratie try one or IZ RADAR RADAR 2 OTARI recording .....