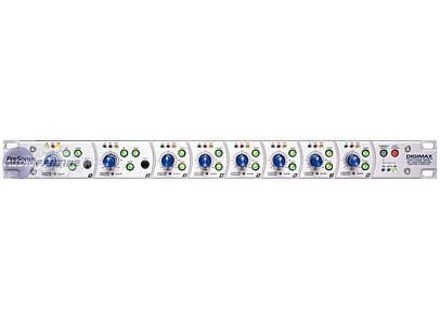 DigiMax, Solid-State Pre-amp from PreSonus in the Digimax series.

I like the fact that they based the mic preamps from the mp20 and vxp versions. Being an avid user of both products I was looking for an eight channel mic preamp to incorporate for my Logic audio, Frontier design setup.I had read many reviews and was fortunate enough to no Jim Wray at the company that is Presonus .I was one of the first studios in Canada to use a vxp unit and still swear by them today !Yes I have more expensive units example dbxs 576, and avalons 737 and 747s but I must say there are many days when we often choose an mp20 or vxp over the Avalons and Dbxs so it was inevitable that the curiosity of such a unit needed to be investigated.We put the unit through many tests Drum kits, keys,vocals ect.the Tone was clean and true on all that we usen the unit on as I have read in other reviews. The limiters worked great on the drum kit solid true and warm!!!Acoustic guitars were also very favorable with bright highs and rich lows. Was this for real well, yes!The 20db pad also worked fantastic.And well although there are other models and other companys begging for your hard earned dollar I can tell you first hand that my experience with Jim Wray and the staff at Presonus have been unpresidented and super reliable .So if there does come a day when there is a problem !No problem your covered ! If your looking for a sensible but professional eight channel mic pre give this one a ride.

PreSonus DigiMax
5
When looking to fill out my pre-amp rack for my remote recording rig, I stumbled across presonus' new toy. It is a 8-channel digital mic pre-amp, all in a single rack space unit. I found the best price at the time was though an online web store. And the price tag of $1,100 was a great deal for such a great peice of gear.

With it's switchable phantom on each channel, phase switching on the first two channels, pad buttons and Enhance buttons, I was finding that this toy had quite a number of features. each channel had a dual servo knob allowing both gain control and access to a very musical limiter (so you don't clip your inputs). Inputs are all balanced XLR. The ouput section is where the boys at presonus had some fun...you have the ability to feed 3 sources at the same time: ADAT lightpipe, S/PDIF AES/EUB, and balanced 1/4" . I personally use the lightpipe to feed into a MOTU 2408 and the 1/4" feed in to my Soundcraft mixer ...the possibilites seem endless.
To get to how it sounds....crystal clean pre-amplification! With plenty of headroom to spare the amps are well worthe the grand you spend on it. It's great to do all your drum tracks I read that the band FIlter used it for that purpose for their latest album.
The enhance button is added for use with acoustic guitars, overheads, room mics or anything that could use a little taken out around 1K .
And finally to make sure that everyone is on the same page, there is that nifty little word clock section allowing sync to 32K, 44.1K or 48 K .

I really haven't found much to complain about yet.

Very rugged steel front plate, silver in color. Cool blue knobs line the front with signal LED's (green for signal, yellow for limiting, and red for clipping) soft touch buttons for phase, enh, and pad turn green when engaged. Sync section with either internal clock or external (switchable)
A lot of care went into constructing such a compact yet useful piece of gear.

It's at least worth it to try it out on yor next project....as I said, it's great for keeping your remote system more compact.

Ben mastering's review (This content has been automatically translated from French)

Clear sonority and accuracy of all, a crystal clear from the cot preamps, very good reproduction of transients, his energetic and punchy.
little lack of precision in the lower medium.
no marked coloration of the sound.
when the breath, it will be indeed difficult to record the classic pianissimo, nevertheless, for popular music, it does not pose a problem.
limiters are easy to use and provides very good protection against saturation, however it should not get into it too much because it are quickly hear all the same!
Really excellent on Drums !!!!
a star in months, as moin well on vocals and soft instruments because his cot punchy and clear can become a bit Gnant ...
raporrt good quality price! it's a solid machine.

Very good machine, reliable and stable
Did you find this review helpful?yesno
»

Beat Hohmann's review (This content has been automatically translated from French)

PreSonus DigiMax
3
Compressor and limiter on each channel.
Pramplis transistors Class A. The first two channels each with a facade in between Jack 6.35 and a phase inverter.
Symtriques 8 analog outputs (25-pin connector type D compatible with Tascam DA38/78/88/98).

The sound is good but ...
the MODEL ssay I had a background noise lev on all channels.
I measured the ratio between 3 microvolts which is 20 dB higher than the Focusrite OctoPre.
Consoles cheap Behringer (MX2004) 0.14 microvolts come - a true reversal of our prjugements on quality audio products ...
Is it coincidence that Presonus does not background noise ratio between the (equivalent input noise EIN)?

For recordings of classical music is the Digimax hepatic unusable because of background noise that Exceeds much background noise for professional microphones like Neumann TLM 103 or Gefell M930 and Rode NT1000. Damage to this product and Presonus.
What ton also: no comment on the noise in the testing of audio magazines I read. Journalists are they trying the products they dcrivent readers?

Can be for other applications the Digimax works, but try before you buy ...
Did you find this review helpful?yesno
»
Read the 5 user reviews on the PreSonus DigiMax »

See all 85 photos of PreSonus DigiMax »