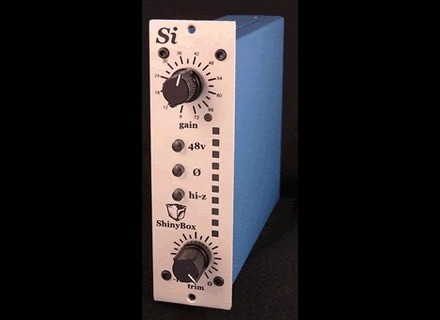 You only need to have basic knowledge of mic preamps in order to use the Shiny Box SI 500 Series Mic Preamp. It gives you separate gain and trim knobs, which is nice as you can really do fine adjustments on your level. Behind the aforementioned other features like the phase and phantom power buttons, that's all you'll find on the SI 500 Series Mic Pre. If you think you might need a manual for this, I'd recommend studying up on mic preamps first.

The tone of the Shiny Box SI 500 Series Mic Preamp is really clean and straight forward in the sense that it doesn't color your sound. It's nice to have different colors around, but it's always good to have some straight shooters around as well. I've used the Shiny Box SI 500 Series Mic Preamp for a few different applications, including for a drum room microphone, electric, and acoustic guitar. While maybe not as clean sounding as an API 512 or a Brent Averill 312, the sound still comes in nice and clear every time.

If you've got a 500 series rack and are looking to add some mic preamps modules to it on the cheap, the Shiny Box SI 500 Series Mic Preamp is one worth knowing about it's one of the cheapest 500 series mic preamps out there. I don't think that I prefer it over an API 512, but when you consider it's a few hundred bucks cheaper, it seems worthwhile to round out your rack with a few of these. I don't know that I'd want a rack full of these, but as an extra to have in the rack, it's the perfect budget 500 series mic pre.