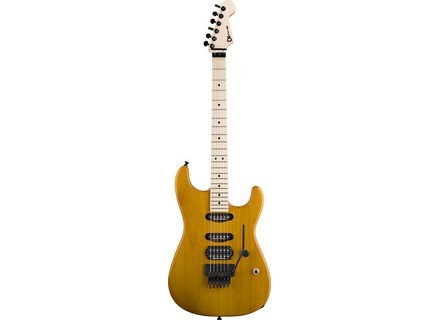 Charvel San Dimas Style 1 HSS
5
The first time I played a US production Charvel San Dimas I was blown away. What in the world have I been playing all these years? How did I not know about this guitar and why hasn't someone told me about them? These were the thoughts going throw my head. These were the questions I was asking myself as I sat down to jam on this instrument. I had never played a guitar that was so eager to race around the stage with, but a guitar that felt like it had been played for 35 years. The neck on this guitar was so incredible and that is really the reason I was so blown away at how comfortable it was in my hand.

This guitar is one of the wild cards from the USA production models. It is a great guitar with the added pickup in the middle. This guitar features the humbucker with the two single coils pickups. One for the middle position and one for the neck position.

The tone from this guitar was so instant that the amp I was playing in soon became mine as well. So the Charvel helped the amp it complimented into my personal ownership. This is a fast guitar as is basically a hot-rodded super Strat from the 80's. A beefed up Stratocaster with an angry chip on its shoulder. This thing is a rocker and meant to be driving hard.

The guitar has a great versatility to it with the three pickups. You can get a great array of tones with these features. The Charvel San Dimas is a pretty stripped down hot rod guitar but this feature with the added single coil gets a good report from me. I like having that extra position to go to especially playing covers. Since a cover band has many songs they have to pull from the added tonal variety is a must have.

If you can find one of these guitars they were going for around $1099, when they were being produced. Now the used market is the best way to go.

I know I have been raving about the perfection of this guitar and it needs to be said. The custom shop necks feel even better. A little flatter on the neck and smooth as silk. So I still give this a perfect but the custom shop has me chomping at the bit. Either way I love the new US Charvels. Fender has really done a fantastic job bringing these hot rod guitars back to where they should be and where they started 30 years ago.

I would recommend this guitar to any player who is not satisfied with his tone and it in that constant search or quest for something better. Look no further than a sweet sounding and looking Charvel.
Did you find this review helpful?yesno
»

Charvel San Dimas Style 1 HSS
5
When Charvel first announced the USA Production Model Series guitars back in 2008, I was excited and nervous at the same time. Could the new models stack up to the classics that had ruled the guitar world through the eighties? I was waiting to find out. I played numerous models as they came in, but I didn't take the plunge for one until I came across the HSS San Dimas model. While it's not as flashy as some of the other models in the series, I found that having the dual single coils was a greater asset than having a more common 2H or 1H setup. Mine featured an Alder body in Charvel's "Trans. Kandy Gold" finish, a quartersawn maple neck with 22 frets, an Original Floyd Rose tremolo (albeit not a German made unit), Seymour Duncan pickups (JB in the bridge, STKS4's in the neck and middle), and a single volume control and three way toggle switch. The mentality with these guitars at Charvel was great guitars with the best parts at a good, affordable price, and I think they definitely achieved this. The whole line of the USA models has been extremely consistent. They play/feel great right out of the box, and the standard feature-set that they use on the guitars is a very good fit. The Floyd Rose tremolo stayed in tune even under heavy dive-bombing use, the neck had a killer profile, and with the satin finish they applied, it felt nice and broken in, and the pickups had a very good range of tones. The singles were nice and glassy, with a nice "Stratty" top end, and then the humbucker was very raunchy and perfect for those monster eighties riffs and leads.

As an interesting side note, I compared this guitar later on to a Japan made Charvel Pro Mod and found it to be far different. The feel of the USA model was much more vintage and broken in, whereas the MIJ Pro Mod felt very modern and stiff, despite having very similar features.

The guitar is based off of a Strat platform, so ergonomically it's almost the same as many of the Strats that I've had over the years. It was a bit on the heavier side but still very reasonable as far as weight goes. The upper fret access was no better or worse than on a Strat, but because of the slick satin neck finish it was easier to travel on the fretboard. I'm a huge proponent of satin neck finishes on superstrat type guitars (or any guitar really) because they really feel much more natural and allow for a much faster playing surface overall. The ease of use is very apparent. There is a lack of a ton of different features (IE: coil splitting, parallel wiring) so the tone is distilled down to it's purest form... raw and rippin'! When I was looking to buy one of these guitars, I felt that the HSS setup adds a depth of versatility that the other models didn't have. This is because the Seymour Duncan single coils are a much lower output pickup, so it allowed some cleaner, more classic tones to be had along with the more girth-y hard rock type sounds produced by the Duncan JB at the bridge position. To cap it all off you have just a single volume knob -- no tone control, and a 3 way toggle switch. Some might say that it might sound better if you had the option of something like a 5 way switch or a tone control or whatever, but I found that in this case, less is definitely more.

All in all it's a pretty simple and easy to use instrument. I liked the fact that it didn't need a lot of extra features to sound great, but rather it made the best of a minimalist set of features. At the price point these sold for, I can see why Charvel couldn't keep them in stock. Sure, they may not be for everyone, but if you want a rippin' sounding hard rock/lead machine that's got the USA stamp on it, look no further!

When I bought this guitar, my amp rig was in a state of flux. I had just changed out my Peavey Classic 50 combo and was using a rackmounted setup at the time that consisted of a Mesa Boogie Studio Preamp (Mesa Mark IIC+ circuit in a preamp and a MosValve MV962 solidstate power amp. It was a very eighties sounding setup... and it was perfect for the Charvel to shine! The clean tones with the single coil pickups was extremely glassy and smooth, and when a bit of dirt was applied, they turned into classic Hendrix-esque firebreathers. However, the real treat was turning the rig to the lead channel, bringing the volume up to ear-splitting levels and letting that Duncan JB scream! The tone was extremely rich in harmonics and I found it to be near perfect for that eighties hard rock vibe. It also cleaned up very well with the volume control and I ended up often turning my volume down slightly to play rhythm, and then bringing it up to full for solos,giving me a nice gain/volume boost. When I compared the Charvel to my other main shred guitar at the time (1987 Ibanez 540R with stock pickups) I found the Charvel to be much richer in tone overall and even though it only had a 3 way toggle switch it was definitely the more versatile of the two. The Ibanez by comparison was much more processed sounding and seemed to fit more of that later eighties Paul Gilbert/Jason Becker vibe, whereas the Charvel was definitely more fitting to the L.A school of tone (EVH, George Lynch, et al.) Two different beasts, but I loved each of them for totally different vibes.

Overall, I would say that the Charvel is a stellar sounding guitar for those eighties hard rock applications as well as SOME classic tones. It's not really a modern metal guitar, nor something designed for classic rock (IE: Zeppelin, Cream, Bad Company

but then again it never professed to be anything more than a classic hot-rodded guitar, so I'm basing my opinion on that.

All in all, I feel that Charvel definitely hit a grand slam with the USA Production Model Series. There is a wide variety of colours available to suit different tastes, and the price-point that they worked to was unbeatable. When I was shopping for a Charvel, I tried numerous different ones before settling on this one. The primary reason why I specifically chose it was for its HSS pickup configuration. The guitars were all extremely consistent, so I was able to base my choice on features or which look I preferred, not which one played the best. If I could make a suggestion or two to Charvel to have improved them, I would have suggested to go with a German made Floyd Rose unit as opposed to a Korean made one (for longer-term stability

and I would say that they ought to have included a hardshell case, even if it meant paying a bit more overall at final sale.

The Charvel San Dimas (or any USA Pro Mod) is a fantastic buy in the market. They are sadly now discontinued, so you'll have to hunt for one (some dealers still have NOS unsold ones... keep an eye out!) The sound quality is probably the highest point of this guitar. The tones that it is meant to do, it does and does them very well. Fans of that classic eighties hot rod tone and feel definitely should give one of these guitars a serious look if they haven't already.
Did you find this review helpful?yesno
»