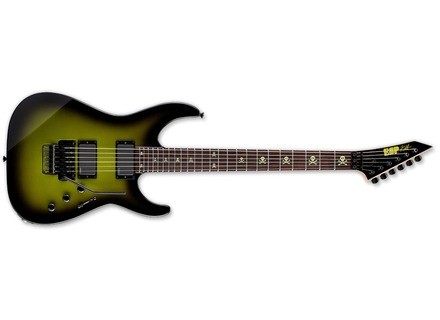 ESP KH-2 SE
4
The main KH-2 signature guitar hasnt changed much over the years. For the longest time it was the only way you could get an M2 outside of Japan. The KH-2 has been around forever. No one remembers the KH-1 which was a flying V thing. When people think Kirk Hammett signature they think this guitar. This is the newest version of the Kirk Hammett KH-2. The guitar has an alder body with a neck through maple neck. The fretboard is rosewood with 24 jumbo frets. The 17th-24th frets on the fretboard are scalloped. It has a locking nut and an original Floyd Rose. The pickups in this guitar are the traditional Metallica EMG set with the 81 in the bridge and the 60s in the neck. The controls are two volumes and a master tone with a 3 way switch for switching between the pickups.

If this guitar didnt play great Kirk wouldnt play it. This is a full ESP that says ESP on the headstock. It isnt an ESP LTD. This means that it is made in Japan by the sme people who make all the custom shop ESP guitars. This is some of the best fit and finish you can get on a guitar. The back of the neck is raw so you get the smooth feel of a bolt on even though it has neck through construction. The higher frets being scalloped means that up there you can get an even better grip on the strings for a better vibrato. The Original Floyd Rose is the original and still one of the best. It holds tune perfectly when properly setup.

These pickups are the traditional setup if you want a Metallica sound. Hetfield has his new signature pickups but the set in this guitar is what they used for years and years. The 81 and 60 setup is surprisingly versatile for a set of EMGs. The 81 in the bridge was one of the first active pickups ever made and it is still one of the most popular. The 81 in the bridge is a metal machine. If you want that thick crunch like metallica this is the pickup to use in the bridge position. It keeps its composure even during high gain with low tunings. It is very consistant as well since it is a battery powered pickup it doesnt care whats going on around it. The sound will stay the same. The 60 in the neck is a good compliment to the 81. The 60 has a bit lower output and has a tone better suited for clean playing and bluesy leads

Metallica has some hardcore fans. If you have to own the latest Kirk guitar then by all means go out and buy this guitar. If you are just looking for a good guitar you can buy an older one used and save a lot of money. They really havent changed much with this guitar. It has a new finish that I dont think looks that great. Everything that matters is unchanged and that is a good thing because it is a guitar that has a good solid design that lends itself to good playability. If you have to have the newest Kirk guitar this is the guitar for you otherwise you should just find an older KH-2 used.
Did you find this review helpful?yesno
»

ESP KH-2 SE
5
With the new year usually comes something new from ESP, and this is one of the things that Kirk has started using. In reality, this guitar is no different from the newer KH-20s, aside from the paint job. The guitar features an alder body with a maple neck-thru neck, a rosewood fretboard with 24 extra jumbo frets, the signature skull and crossbones inlays (now in aged green), an original floyd rose tremolo, two EMG humbuckers, two volumes, one tone and a three way switch.

The main feature that this guitar has is the new paint job, and it looks great. The fading was done nicely, and there were no drips or runs in the paint. ESP is generally really good about paint, even if they do apply it a bit thick at certain points. The rest of this guitar is the same as any other newer KH-2 out there. The fretwork was top notch, just like you'd expect from ESP. The guitar also had a good weight to it. The necks on these are nice and thin, but they're not super thin like Ibanez necks. It also had a nice C/U shape to it unlike the D shape from the Ibanez style necks.

The guitar is equipped with the current pickup configuration that Kirk seems to be using, and that's the EMG 81 in the bridge and the EMG 60 in the neck. The EMG 81 in the bridge is awesome for metal. It's very bright and cutting. This works great for those super dense metal mixes which tend to be geared more towards the low end spectrum. This allows you to be heard as a guitarist, but you have to be careful as it can get a bit shrill on its own. The EMG 60 in the neck is great in mahogany bodied guitars, but I find it to be a bit too bright for this wood configuration. It's great for cleans, but it's kinda lacking something for leads.

If you're a big fan of the paint job and green inlays on this guitar, you'll want to look hard at buying this model. Aside from that, you're probably better off buying an ESP M-II NTB. I'm not trying to push the standard line but just give you options on something that could help reduce the costs and prevent potential "fanboyism" comments from other people out there.
Did you find this review helpful?yesno
»

Pr0cop$ora's review (This content has been automatically translated from French)" "It's good!""

ESP KH-2 SE
5
Signature Series, made in Japan, the undisputed master of violin.
Channel extra fine wire (neck-thru) in maple frets "extra jumbo" festooned with 17th to 24th; keys rosewood inlaid with the legendary "Skulls & Bones" (in green!) And alder body.
Two EMG active pickups signed. 60 in a microwave and a handle 81 in the bridge position.
Finish Greenburst impressive by its beauty, duplex. Only the handle is not painted.
Grover, very reliable, an original Floyd and finally three knobs, one micro and one tone.
Difficult to balance this part "characteristics", the likes of a guitarist to another is very versatile. Anyway, very subjectively, therefore, for the first time in this configuration is perfect for my style of play

This is where you can expose without fear all the efficiency of violin ESP.
As soon as you open the flight case, it's ecstasy. The guitar is also well packed a bomb ready to explode, the details up to prevent contact-handle string (metal timber) with a small plastic tab.
Once in hand, the balance is perfect. The double-cutaway shape is cut out for solos. Access to acute is impeccable (you must admit it would be unfortunate for a guitar solo).
Well, we have unpacked, we have in hand, and if it is plugged?
OH-MY-GOSH, is it real?! It sounds too good to be true that. Sustain, depth of sound. These pickups are really great people.
You loose the ropes, and even without cutting the volume you do not hear a bruit.On says while the electronics must be as concrete as the rest of manufacturing. Good points in favor of ESP when we know that all too often, the internal is often sloppy in favor of the visible, preferring the effect of "dressing" rather than the quality of the instrument.
I repeat, then, but until then, it's flawless.

I adopted a little while now since two faithful companions.
One is a portable all-appointed BLACKHEART lamps, the other is a multi-effects called BOSS GT-8.
The sound is beautiful, whether clean or distortion.
The EMG81 is built for the metal, definitely. This is a pure delight to operate its grain saturation and sharp incisive.
The EMG60 meanwhile appears to be much fuller and deeper, a happiness that gives the guitar a limitless versatility.
With it, no need to change the guitar in a desire to move from blues to rock or reggae, or then by pure fénéantise order not to retune the guitar.

I use it for exactly 5 May 2012, but it's my best friend.
It is certain that it is a sacred investment, but damn! it was worth it!
Well, everyone knows that music is a passion that is expensive, especially if the virus grabs the collector of guitars, that said, the models called "high-end", those costing arm and a leg to be clearer, certainly not a priority to set as a beginner. Even if you have money, it is not used much when we do not know its capabilities to extract.
I just bought this model after nearly eleven years of guitar behind me.
So yes, I have tried models. I've owned and still owns a lot: Epiphone Les Paul Special II BC Rich Warlock NJ Speedloader, Ibanez RG321, Fender Tele Deluxe Triple, Gibson SG Voodoo, ...
THE KH-2 SE proves unsurprisingly my favorite, however, past all the guitars in my hands, only one (the list established previously being far from exhaustive) will do to him of the Shadows: The SG Voodoo.
Small detail in passing new guitarists tend to forget that electric guitar is accompanied by electronic effects. In this case, obviously it would sound "worse" (do we understand) the effects of chorus, reverb, distortion and other 'does not sublimated its sounds.
I am not hypocritical to the point of sanctifying and ESP does not will note my overall opinion of a 10/10 final, having said that, to repeat, it is clear that I start with your eyes closed.

Published on 01/06/11
Another limited edition Kirk Hammett Signature Series model is being introduced in 2011.