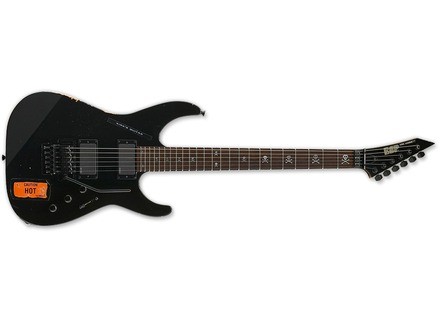 ESP KH-2 Vintage
5
Kirk Hammett has been a long time user of ESP guitars, and the KH2 is one of his most famous guitars. It's based off of the MII that is normally purchased through ESP. However, he has a model that he's had for ages. This is a replica of that model. In reality, this is just an aged ESP KH2, so it's not much different from a normal one. The guitar has a neck-thru construction and features alder wings, a maple neck with a rosewood fretboard, 24 extra jumbo frets, skull and cross bones inlays, an original floyd rose, EMG pickups, two volumes, one tone and a three way switch.

The guitar is put together great. The first thing that stuck out at me was the aged finish. It's done quite well, and it looks very close to Kirk's actual model that he naturally aged from all the touring he's done with the thing. The sticker is a bit odd, but it's "to spec" so I understand why they put it on. The guitar's fretwork was great. There were no low frets, and they were all polished quite nicely. They also didn't slice my hand up. The guitar features a neck-thru construction, so there were no issues with any neck joint gaps or anything like that. All in all, very nice.

The guitar has an EMG 81 in the bridge and an EMG 60 in the neck. The EMG 81 in the bridge is very cutting. It'll cut through the densest mix, and considering how low end dominant metal mixes can be, this helps to be heard. It has tons of output and lots of dynamics. It's also pretty clear under high gain, but it's somewhat compressed. The EMG 60 in the neck can get a real cool lead tone, and it works great for clean tones. I generally prefer the EMG 85 in the neck, but the 60 can work if you're looking for something that's closer to a single coil sound than a humbucker sound.

The guitar is great. However, thanks to the ESP M-II NTB coming out, I kinda wonder what relevance it has in the lineup. Before, it was the only real way you could get a neck-thru alder bodied ESP with a rosewood fretboard. Today, you have a much cheaper alternative with the only real downgrade being that you'll have dot inlays. If it were me, I'd get the M-II instead.
Did you find this review helpful?yesno
»

albron00's review (This content has been automatically translated from French)

The neck is very fast.
The easy access to the treble.
The ergonomics are very good.

Very-very big difference compared KH-2 bolt-on.
A Les Paul with the same costing twice its most expensive
Did you find this review helpful?yesno
»

sravpes's review (This content has been automatically translated from French)

ESP KH-2 Vintage
5
Made in Japan Custom Shop.
The KH-2 Vintage is a precise reproduction of That first KH-2, with the finish wear and stickers Accumulated Pendant Many Years of touring painstakingly Reproduced

The guitar sound Punchy, clean, and you can play the picking technic very easy.
The work is incredible. Easily I can play up to the 24th cargo Could Easily play and Reviews another 3-4 frets if They Were there. Remarkable workmanship. The neck is smooth and just the right thickness to width ratio to make it easy to play.

It's very suitable for Rock / Metal, goal suprisingly, I've aussi Played jazz with it, and it sounds fantastic as well There

I play alot of metallica That Is, and i managed to learn Every Single Including icts song solo. Gets you buy dam fast doing That, and Makes You think like Every solo is easy. This guitar is not just for soloing, ict for heavy riffs too.
Did you find this review helpful?yesno
»

sravpes's review (This content has been automatically translated from French)

The handle is very pleasant with easy access to the treble.

I use it for 2 years
The guitar is chre but I am very happy to wash
Did you find this review helpful?yesno
»