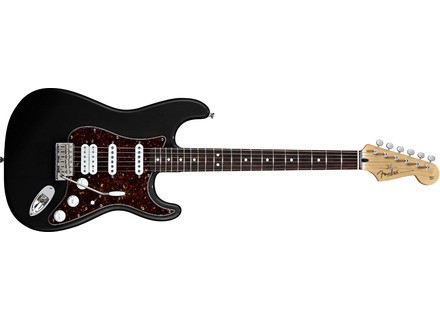 pjn35's review (This content has been automatically translated from French)

Fender Deluxe Power Stratocaster
Bonours I possde a Fender Strat Higway Honey blonde, buy new there are 3 ans.J'aime the sound of this guitar and very pleasant to play. One problem, <strong><span style="text-decoration: underline;">keeping the tuning</span></strong> ... I wonder if there is a "medium" to avoid this kind of dsagrement. I accuracy of all I Adi ressrer the two screws located drrire the vibrato system, to "block" a little one on the body, but nothing n ' made it ... I do not play ever with the vibrato.Je have rgler my tuning every two or three morceaux.Drangeant in concert ... Not that she's totally "false" but tuning there is plus.l'autre guitarist of the band also has a fender, and never has this kind of problems.
I had invested in US thinking this guitar to have something that "kills", but it annoys me today cot.
If a benevolent soul could give me some advice ... I'd be grateful.
Thank you for your intRet.
Musically.
Did you find this review helpful?yesno
»

Reach-Art's review (This content has been automatically translated from French)

Fender Deluxe Power Stratocaster
5
Made in Mexico, it'sa series of upscale Mexican.
Channel 21 frets, standard Fender tremolo bridge with Fishman piezo system built into the saddle.
Initially we have a rosewood handle type C with vintage vintage mechanical.
Volume knob for standard magnetic pickups, tone to these three microphones and the change comes from the last button tone which is replaced by the volume of the piezo.

The handle of origin does not please me, so I actually replaced by a Fender Stratocaster neck maple fingerboard with standard mechanical Fender USA oil bath, and the guitar is Desuite become much more enjoyable to play for me ; maintenance agreement also become even better thanks to new mechanical.
It weighs the standard weight of a stratum, it is very well balanced.
Already it sounds good unplugged, which is a good point.

Its level at the origin we have two single coil pickups Fender Tex-Mex in the neck position and middle and bridge pickup Tex-Mex humbucker. The single coils sound correct and the humbucker, but being accustomed to the Texas special so I did replace the pickups. As I already have a Start with two humbuckers HH I wanted another layer but typical configuration, three single pickups. And therefore with the three Texas special sound became clearer and warmer: the top for me. I play mostly pop-rock, rock and blues (RHCP, Hendrix, etc ...) and this guitar is perfect for that.
Level acoustic sound with the Fishman is really stunning: connected directly to a console with the stereo, if you close your eyes you can almost hear a Real Audio (especially in rhythm). By mixing the acoustic sound with magnetic pickups are obtained very good reviews in both rhythmic arpeggio that is really great.
I only takes 9 for sound because I have changed the pickups, but now with the Texas Special I would put 10.

I use this guitar on stage but I will separate because I have more utility, but this is the fifth strata that I have and I think it's more versatile than I had thanks to piezo Fishman excellent as well as his electric bill.
I owned a Peavey Generation EX a year Piezo who had the same feature but that was one level below.
It really is a fabulous Stratocaster that will delight fans and those looking for a nice electric playing, quality and can deliver very good sound as well as electrical waves.
Here is an excerpt together or you can see and hear me use this guitar: I go through the stereo jack connected to a steering box on the console directly to the acoustic sound and electric sound out on a digitech RP7 connected to a Peavey ValveKing (guitar starts 01mn47 until the end): https://www.dailymotion.com/video/x5pwaz_lithium-coldplay-juin-2008_music

If I again need a piezo electric choice I would do this without any hesitation.