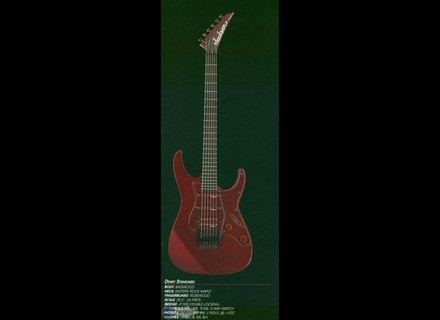 Dinky Standard, STC-Shaped Guitar from Jackson in the Professional series.

Jackson Dinky Standard
3
A low to standard quality overseas guitar made over in Japan. The guitar has the following specs:

Basswood body
Maple neck with a rosewood fretboard
24 extra jumbo frets
No inlays
A Jackson licensed floyd rose
HSS configuration with a pickguard
One volume, one tone and a five way switch.

The guitar had some neck joint issues. It wasn't as tight as it should have been. The fret edges were a touch sharp and should be looked at. The crowning of the frets didn't seem to be too bad, ironically. That's usually the biggest problem with these guitars. The Jackson floyd that was installed in this is pretty trashy. If you're going to keep it, you should replace it with a higher quality floyd rose.

The guitar didn't sound that great. These were some in house Jackson pickups. The guitar itself was a bit more resonant than the other ones thanks to the pickguard. The bridge was muddy, and I couldn't get any real clarity out of it. The neck and middle pickups seemed to be the same thing, just in different positions. They were a bit noisy, and they sounded kinda thin. They also didn't have the output that I normally look for with single coil pickups.

These guitars aren't the best in the world. If you can, I recommend trying to buy a higher end Jackson. You'll get more value for your money, and it'll most likely be a higher quality guitar. I also think you could do better with an LTD variant, but that's just me.
Did you find this review helpful?yesno
»