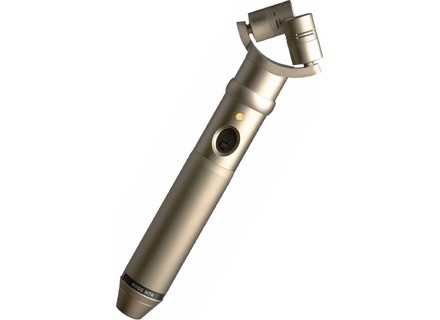 View all offers for RODE NT4 »

RODE NT4
5
The Rode NT4 is a stereo condenser microphone that is designed for use in the recording studio. I've used the NT4 at a few different studios in the past, and for the price it's definitely one of, if not the best stereo microphone you'll find. The mic is set stationary in an XY pattern, which can be both beneficial and not, as there isn't much room for trying out different techniques with the NT4. The mic has a stereo cardioid polar pick up pattern, and has a frequency range from 20 Hz to 20 kHz. It comes with a hard shell carrying case that includes a clip for the mic and the proper stereo cabling for the mic. There is a shock mount for the NT4, but it's not included.

Overall, the Rode NT4 is a great little stereo microphone. Most stereo mics out there are going to cost you a good deal more than this one, so you're certainly getting some bang for your buck here. The application that I've mostly used the NT4 for is as a room microphone for a drum kit. I guess I really use it for more than a room mic, as often I'll throw it overhead in addition to the separate drum overheads. Having said this, you could certainly use this as your main drum overheads, there just isn't much room to adjust it beyond the XY pairing. Even though I've seen a few of these at a couple of different studios I've been to/have worked at, this is really the only application that I've used the NT4 for. If you do have one or are looking to get one, it definitely seems like a versatile microphone, I just haven't had the chance to try it out for other applications as of yet. I don't think that you're going to find another stereo microphone of this caliber in this price range or cheaper, so if you're looking to pick up a stereo microphone without spending a boat load of cash, the Rode NT4 is a great way to get the job done.
Did you find this review helpful?yesno
»

RODE NT4
4
This is a pretty unique combo mic. It is actually like two mic capsules in one. There are two small diaphragm condenser capsules housed at the end of a single mic body, and they are configured in a permanent 45 degree XY setup. This is obviously a huge convenience if you want to have a good pair of condensers for stereo miking. The capsules are assuredly matched to one another in terms of specifications, so you know you're going to get a consistent stereo field. The output on the mic is necessarily stereo, so you may wonder what kind of a weird cord you'd have to have in order to connect this. Rode does provide you with said weird cord, which basically just connects to the mic's output on one end and on the other end are two separate standard XLR connectors, so you will just need two separate XLR inputs on your preamp or converter. The mic does need normal phantom power to operate, but it also can be powered internally by battery which is nice. Rode also provides you with a nice case as well as a wind shield which comes in handy if you're miking outside. The overall sound on these mics is quite nice, coming across as fairly even sounding across the spectrum. The sweet spot for this mic seems to be about 3 feet in front of it depending on the source.

I bought one of these when they came out, thinking I could keep one set up permanently in my studio for when I needed a quick stereo mic job. These aren't the purest sounding mics in the world, but they are clear enough and at less than $600 for the &quot;stereo pair&quot; it's a great value. I do recommend this mic for anyone who really likes XY stereo miking, likes the sound of Rode's condensers and doesn't want to deal with the hassle of aligning capsules manually. Nice product!
Did you find this review helpful?yesno
»

RODE NT4
5
The Rode NT4 is a set of condenser stereo microphones, set in an XY pattern. It has an on/off switch, useful when you don't want to waste the battery on it (which is probably always).

I've used this mic extensively in a local studio. I have used it for acoustic guitars, room mics, as drum overheads and with a number of other acoustic instruments. Its got a clear sound and I love that it is fixed in the XY pattern - this saves set up time if I am looking to capture something with an XY stereo pair. I haven't used any other stereo microphones like this one, but for the price, it seems to be the best in its range. It really sparkles on the top end and the price, like most Rode mics, is pretty reasonable. I have had a bit of trouble with keeping it healthy, as it has been broken a few times. I believe this has more to do with the cable it comes with though. I also wish the mic cable that comes for it was bit longer, overall I have been very happy with the sound quality and features that the Rode NT4 offers.
Did you find this review helpful?yesno
»

shimelo's review (This content has been automatically translated from French)" Nice find ..."

RODE NT4
5
Stereo microphones set 2 records for a couple scenes in stereo. Electrostatic, phantom power and even power supply with batteries loaded!
I use it mainly in overheads battery, freeing up my pair of Neumann KM 185.
Also very good for recording acoustic guitars ...

Bought used two years ago to an acquaintance seeking Sennheiser MD 421 I do not know anything about this model. Professional musician and sound engineer for over 40 years, I had the chance to try, compare and buy most of my pickups for different studios, but I've never invested in a stereo system. I had the opportunity to test long ago a Neumann KU 100 dummy head, a marvel but really expensive ... (approx. € 9,000) ... Very deterrent despite the exceptional side.

The good points: There is plug in, turn on the ghost and find the best position, no doubt on the phase of the couple and go ...
No breath, an excellent level so good sensitivity. Rich, well detailed and very neutral.
Obviously, he was trying to do a thorough comparison with my pair of KM 185, for me the only relatively cheap solution so far to avoid the inevitable Schoeps.
Well, for sure I prefer the KM 185, it's normal, they are more hyper-cardio which changes the game but overall it's really stunning and it really takes a place with an acoustic hell to make a difference. For me, it's not the same sound, that's all, but it is no good and bad.

Bad points: The special cable but it's not a problem, as it looks fragile beware.
The size and weight: with the right foot, it goes.
Sensitivity to wind: Nothing special: Outside the slightest gust of wind and it's cooked. It's the same thing with my Zoom H4 since there is no protection and little supplied windscreen is just to point out that the external microphone is not the best choice
On the manufacturing front, good but could do better for the same price (after a moment of the game appears in the body of the microphone)

What I like in this micro: Its sound, its technical performance even compared to a high-end torque, ease of use, quality / price extreme .... Well it's not bad ...

With 2 years of experience in its use, I can say that is good in his field and he even belong in a park studio microphones right level. I also take almost a second, but new ...

Did you find this review helpful?yesno
»
Read the 13 user reviews on the RODE NT4 »