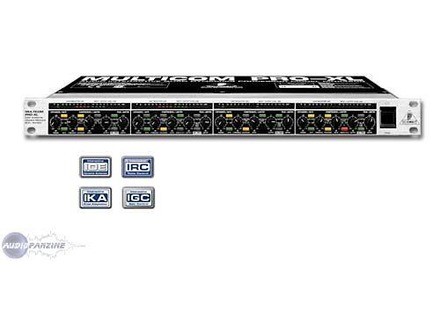 Behringer Multicom Pro-XL MDX4600
3
Need a cheap, rackmountable compressor with 4 channels? Then you've come to the right place. The Behringer MDX 4600 can take 1/4" or XLR inputs and outputs and can switch from -10 to +4.

The MDX 4600 has the standard settings found on a compressor: set the input, the ratio, output, and limiter and whether each channel is going to compress, gate, or expand. There are two settings for the speed of the dynamics processing, which can not be manually set, as well a setting for limiting interference from the bass frequencies in triggering the processing. There is also an "exciter" setting for each channel. Each channel can be used independently, or channels 2 and 4 can be daisy-chained with the previous channel for stereo processing.

Just plug it an and you're ready to go, the manual is there for someone who doesn't know a lot about dynamics processing.

The sound quality is OK, provided you don't push the compressors too hard. Once you start to dial in pretty harsh ratios, things can get a little funky and jumpy due to the lack of being unable to manually dial in a speed for the processing. That being said, so long as you aren't trying to overcompress, things will usually turn out OK, as the unit is relatively quiet and does a decent job -- just don't expect it to work miracles and you'll be satisfied. It's not really a transparent compressor.

It's good for the money, but because it's Behringer don't expect it to hold up forever. I have two of these units in my studio, but they'll be replaced with far superior (and far more expensive) dbx compressors soon. Because these aren't very transparent, and during tracking it's easy to miss some of the small details, I would avoid using this compressor while recording and save it only for mix-down. You don't want to get caught up in a situation where this compressor did too much, or dialed in too late, and screwed up your recording.

Behringer Multicom Pro-XL MDX4600
2
What are the effects or types of effects available?
This is a compressor 4 votes

What is the connection? (Audio / MIDI)
6.35 Symetrique

Is this a rack or rack MODEL?
19 inch

The general configuration is it simple?
yes ... there is neither attack nor relaese ... His two parameters removed, perfect for beginners!

Editing sounds and effects is it easy?
Yes. except with the knobs notch ... well you put your buttons or not you want!

The manual is clear and sufficient?
probably.

The effects are they effective, responsive and realistic enough?
compression works pretty well. the problem is that we descend down the sacrament treashold to start picking up the sound, and taken in a little bacon in the ratio.

Which instruments do you use?
I compress my drums with particularly, kick, snare and HH

How long have you use it?
two small years

What is so special that you like most and least?
4 comp reunited in a single rack

Have you tried many other models before buying it?
a few
How would you rate the quality / price?
good
With experience, you do again this choice?
the problem is when two years he has started to weaken. times the signal passes over. so I'm forced to rush a bit. BACK him in bacon, riding the gain in my daw so that this alarm. I do not know of his or vien (probably a system standby or clowning like that)

I think the quick change for two compressors

Behringer Multicom Pro-XL MDX4600
5
I bought almost all versions of Multicom compressor gradually emerged as the Behringer. I am the 3rd generations.

Each Next-Generation has brought new features while keeping the same format. Each time a new potentiomtre and one or more keys appeared. Now I do not see any new feature Behringer can make the next time the device was so advanced and t the front is full.

1. Gate / expandeurRglable in line (1 knob) and two positions for speed (switch) + 1 green (pass) / red (ferm. Simple and effective: the microphone of the snaps that do prsentateur when it comes in and closes automatically when s'arrte talking. Opening time instant phasing and silent.
It's simple, effective and sufficient.

2. Compressor with adjustable threshold, the percentage of compression and output level. I use the key that systmatiqueent Reduces the bass sound in the control circuit. Compression is more natural.
I also use the button that goes back systmatiquement the acute high compression ratio, which can compress quite strongly effects without teachers.
The time of action are well rgls gnral for use. The effects of compression nfastes disagree as long as one does not compress too much (6 10 dB). Above, the sound is fine but lacks a bit of momentum I got.
I also use the button systmatiquement KNEE makes the compression more progressive.

Each compressor is equipped with two bars VU meters LEDs, one for levels (switchable pre / APRS compression) and one red for the compression ratio. This bar has its dernire Premire LED that lights up for 1 dB compression (insensitive), the next to 2 dB, then the cart increases. Thus, although we DTECT The beginning of the compression and the dose is very precision.

I often amateur artists who are not trs wise in the use of micro. It follows the peaks and troughs of dynamics for some who are close or too s'loignent the microphone. Other rgler do not know the level of their voices and whisper tantt tantt shout.

I therefore use the quad compressor to compress the voice least four of my wisdom mix.

It happens as often to compress the live recording and in this case with two compressors are key synchroniss Stro, while two other compressors limit remaining two votes less wise.

While there are compressor-limiter-gate more complete in terms of the hard dclenchement, retention and release, but they possdent that two compressors per unit height and are 2 see more bulky.

In addition, the harsh chosen by Behringer and automation make the operation completely transparent, which is not the case for all devices o rgler can not empty well and rgler ncessitent who edits throughout the show. The automatic is a good thing.

I kept the two compressors Previous versions, which would allow me to compress 12 channels of console if ncessaire.

But the last assurment MODEL is much more powerful than its prdcesseurs and finally trs not complicated to use: once you have configured the buttons and it has been r gl there are not many other actions to do except adjust the compression threshold depending on the level desired.

As against the manual is enough for those who pnible beginners with the MODEL: it covers all the range of compressors and Behringer Describes many functions that are not Submitted on this unit.
For me who was lucky enough to have read the manual versions antrieures dcrivaient that only the product sold, I did not need much explanation to use this new version amliore .

tenebras's review (This content has been automatically translated from French)

There are many functions, but they are all well explained in the manual. everything is rather well done on this unit. It is important to note that there is no built-in preamp and it can therefore be used in insert (if you connect a microphone directly into it, the signal is too low).

Once in the past have a voice among other incredible fishing (I am not exaggerating). and although the attack and release are not really configurable, pre-automatic settings are very well done, the signal is compressed at the speed you need and do not include compression.

Really nothing to say, my recordings sound very different since I have and I could not do without it, plus it is not very expensive for what it is.

Did you find this review helpful?yesno
»
Read the 7 user reviews on the Behringer Multicom Pro-XL MDX4600 »