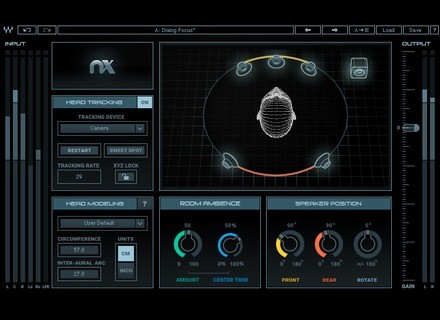 A review of the Waves NX Virtual Mix Room plug-in

A Revolution in Headphone Mixing Headphones are great for checking details when you’re mixing, but to mix on them exclusively has always been a challenge — at least until now. Thanks to a revolutionary new Waves plug-in called NX (Mac/PC), you can put on your headphones and mix in a virtual control room with perfect acoustics no matter where you are. What’s more, NX also makes it possible to mix in surround, through stereo headphones! Read more…

Waves NX Virtual Mix Room
4
I use this plug-in with the following configuration :
PC w/ Windows Seven, I7-4770k, 16GB, SSD (Samsung 850pro)
Berhinger U-PHORIA UMC 1820 sound interface
It's better to have a sound interface with at least 6 outputs so as to be able to mix in 5.1. Otherwise, you can also consider using out port emulators...

This plug-in is very stable and light on the CPU. Very easy to get used to, it also has a very complete documentation.

It is quite efficient, but certainly not the best. It was released at $49, but for its current price (twice as much I believe), there may be better from competitors.

An interesting included feature is the possibility to customize the plugin according to your head size. Even if, to complement -or replace- it, the best solution would have been to ba able to choose several hrtf filters...

No calibration depending on the headphone used is offered... a real pity!

The head-tracking feature is rather toyish and inefficient.

For $49, I'd do the same choice again (while still remaining open and attentive to comparable products by competitors), but for its current price... Well, not so sure I would ^^
Did you find this review helpful?yesno
»

Published on 04/12/16
Waves has put together a drawing where 100 lucky people will win a Waves NX Virtual Mix Room license.

Other categories in Surround Sound/Spatialization Software