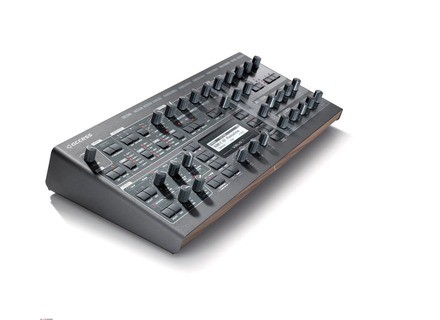 Access Music Virus TI2 Desktop
5
I bought my TI2 as a new unit from US. I can't remember how much it cost, but it has been worth every penny ever since. I'm already a proud owner of Virus Powercore and Virus C, so TI2 was a warm welcome to my studio.
First thing I noticed was that the user interface has had a great facelift with new leds and new thinking of knobs on the front panel. This is more than welcome comparing to the old user interface of TI1 for example. There is much more space between the knobs and the panel itself if a bit "taller" and looks modern with its wooden decorations.
I'm making electronic dance music and I'm doing sound design on advanced level, so I was able put the TI on it's limits. Although they promise you a lot more voices, it does not always stand for it. This is due to simple fact that by adding more effects to a patch, you will loose polyphony.
Sound engine is probably the most talked thread about TI of course after the USB connection and I have a word here I would like to say: The sound engine is not the same comparing to Virus C, but I'm not saying it's a bad thing. Old engines like Virus C intend to have quite muddy sound, although there is punch / depth presence in a way that the new engine is left cold.
I'm not the guy that connects stuff with USB's and wifis to my DAW, instead I'm using a 96 channel old desk to connect my synths & emagic amt-8's that send / receive MIDI. I'm happy to use my TI without the official Total Integration software since for me, it caused loss of sync and much more due to the complexity of my setup.

+ I like the new looks of it
+ Sound engine allows much bigger sounds
+ Delay and Reverb at the same time? YES!
+ Effects are new and constantly new ones appear
+ Product support is good as it has always been

Access Music Virus TI2 Desktop
1
It's disappointing to think that you would spend this much money on the Virus TI2 desktop and have it not meet your expectations but that is exactly what happened in this instance with me. I bought this synth to integrate in to my workflow using the Virus plugin. The problem is the Virus plugin is not very good . Apparently the folks at Access can't figure out the USB protocol, which is whole heartedly disappointing. Regardless of whether I am working in Ableton Live 8 or Logic 9 the plugin does not function properly.

set up was not easy at all! and no support from Virus!


Constant errors and issues crop up while using this plugin. I have contacted Virus support and worked through every recommendation yet still the Virus plugin doesn't function properly. Every time I sit down and try to work, this thing messes up. It works occasionally but not consistently and that just adds to the frustration. I have to constantly reboot when issues are encountered. Everything else, even USB audio interfaces work flawlessly. I don't even use a USB audio interface, I am using a Firewire Interface so there shouldn't be a problem, but there is. Some people with some configurations may not have a problem but I am using a new iMac as well as a new Macbook Pro and there are nothing but problems.


If you are looking to actually use the functionality of the Virus plugin then I can't recommend it. I know it sounds harsh but I feel I was ripped off. This is because it's affecting my creativity, which is the absolute worst thing that I can think of happening. I find myself often going back to soft synths so I don't have to deal with issues that crop up with the Virus plugin. I don’t recommend this for mac users, or even pc users for that matter. The virus ti2 let me down and I am not happy with it.


1 of 9 people found this review helpful

Laurent Schaëffer 18's review (This content has been automatically translated from French)" It's heavy!"

The config is simple.Avec MAC / PC utility is accessed very quickly all that veut.C is disconcerting ease and yet I am far from being a manual expert.Le is going clair.Je the study a little more detail tonight to apprehend better ergonomics "hardware", the beast was unpacked this morning.

The sound ... What slap! It's amazing how this is puissant.Attention monitors anyway ...

The editing possibilities are truly good soul who nombreuses.Moi nitpick, I think I'll be served! Many presets to start having fun at first temps.Je have not had time to go around as there ... There's something for all tastes and styles.

I also have a MFB Dominion X SED, a RT Spectralis II and MS20 Mini.

The sound that disconnects strong

Pleasant to the touch knobs

The utility that facilitates research work.

I have some crackling when I change the settings via the utility. But I work with Reaper, which is not supposed to work avec.Je will try to deepen the buffer settings ... etc.J 'would prevent release € 500 + in Live.

I do not regret this investment and I would do without hésiter.Le value for money is honest, given the possibilities of the instrument.

Elastine's review (This content has been automatically translated from French)

Access Music Virus TI2 Desktop
4
these features are simply outstanding. it can be used in any type of production that is to make the composition, and even live sound design, it will be in any case a tool that you appreciate having on hand ...
In addition it has full integration in VST, can serve as a sound card (to avoid anyway!) And to create 16layers the same time ...

Its use is perfectly clear. more manufacturer "ACCESS music" has a very good customer service with video tutorial on their site for beginners, regular updates ...
The matrix mode is simply fantastic. it lacks a curve editor for my part, but one can not share all its possibilities
Only small problem on the fact that sound can vary quite a bit between the different readings in VST mode (analog synth anyway!) Unlike virtual synthesizers.

The sounds are very good qualities and deep. Very formidable, it may help you in many situations .. But it will still privileged enough styles in "dark" and electronics. I particularly used Neurofunk and Drum and Bass.

I use it for about 4 years and it serves me in all my projects, it is a bit expensive but when held in hand we understand that this instrument is good. I personally love the sound and its use. Finally I recommend it to all fans of electronic music and syntèse

Did you find this review helpful?yesno
»
Read the 9 user reviews on the Access Music Virus TI2 Desktop »