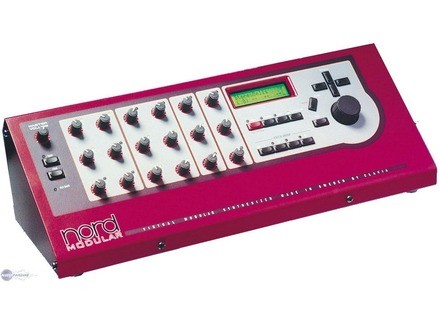 Clavia Nord Modular Rack
5
-How many sounds, effects? What styles? Are they edited?
Number of patches in memory according to their complexity (number of stakeholders osc modules / filt / env / mix / effet...dans creation).
More complexity = - patches stored.
Attention to saturation -> "Flash Memory Full" error!
-Via a Mac / PC utility?
To get an idea of ​​publishing a downloadable app on the Clavia site is available for free, similar to the NMG2.

-The edition of sounds and effects is it easy?
An effort of understanding is required.
An "educational" machine, which helps to understand the basics of synthesis in general.
-The manual is clear and sufficient? ...
Search French manual on the net, many forums dedicated to this machine (Sons, news, docs ...)
Musicians "specialists" of these machines (Micro, NM and NMG2) on an American forum in particular.

-How long have you use it?
More than 15 years of use between Micro, Nord Modular - first generation (NMG1 does not exist) and now NMG2 (philosophy).
-Have you tried many other models before buying it?
Many different and not always comparable synths or compare with NM today Laptop / VST / VSTi and NMG2 in my studio.
-What is the particular feature you like best and least?
Curiously complexity is an advantage (for me), but sometimes may be prohibitive in some (time-edition).
-How would you rate the quality / price?
With experience, you do again this choice? ...
An analog modeling synth has only in this form, to my knowledge, prices average, NM If 3rd generation one day ... Why not!
In occasion: Beware of over-pricing, an opinion that is only my opinion: Between 300 and 350 €

stiiiiiiive's review (This content has been automatically translated from French)

First and foremost, I want prciser a test and a product is on AudioFanzine Submitted. A visit and the site www.clavia.se.

This is a virtual semi-modular synth. I explain this unfortunate formulation.
There are two parts:
- The onboard hardware DSP 4 (expandable 8), controllers and connections;
- To assemble the software patches and perform transfers.
Communication between both parties is done via a pair of MIDI connections ddi.

Each patch is either a "simple sound" (as a "program" in a synthetic lambda), a synthetic whole, with its buttons and a multitude of rglages that give many DIFFERENT sounds (like a analog). With audio input, it can also be a multi-effect original.

Who does not want, or not known to his propore patches, there are thousands of download on the net. They can be reworked on the home PC / Mac, and flash in the rack to mount on the boards. Or have a portable scne, why not.

Bulk:
- 32-voice polyphony of 4 according to complexity of patches (minimum 8 expandable card optional). On this subject, see the test;
- 4-part multitimbral;
- Connectivity: 4 Audio Out, 2 Audio IN, a headphone jack, sustain, expression (all in 6.35), MIDI in / out, PC in / out (the couple MIDI ddi);
- 18 assignable knobs compltements.

The configuration is very simple. If your MIDI interface is properly installed, the software DTECT aussitt the synth.

The manual is complete trs: description of soft, hard, each module available, and the bases synthse. It is available in the language of Molire requested, I believe it.

The edition, which is you do. Its buttons are assigned to paramtres we want, we INSRE the modules you want, it's total freedom. Thanks to groups of morphing, a button can even CONTRL paramtres several at the same time, on a beach program also by you. At worst, the patches contain the net wonders, but the charm of the machine RSID in its programming.

At the sound is versatile trs. Obviously we can find the sounds of Nordlead and set things done all Different. I have not tried many competitors, but I read that sounds a little Clavia taient typs. Well, either.

I got very good sub bass, leads the original, bizarre sound effects, pads or NewWave trs organic ... I even programmed a patch that simulates a storm: one dose in the wind, rain room, plop the plic, thunder etc.

You can also program the "noodles" cd patches gnrent that sound alone. They are launched, and they make their living.

In terms of using multi-effect, do not look for reverb. You will fall plutt on the chorus, the distortion, and all kinds of dynamic filters (with envelope follower ...) and other pitch follower, vocoders etc. Trs trs is convincing.

Everything is trsrpandu on the net: a mailing list, thousands of patches, I RPET, programming techniques advance, more or less ... teeming with resources.

I use it for about ten months. I'm in love. I find it hard be objective, but I will try to raise some default:

- When you load a patch, the distribution of the DSP power is recalculated and the sound is interrupted half a second. This problem scared me, but suffice it to load its prvoir and 4 patches in advance.
- A couple MIDI for communication and another for the ride. Some find it embtant, not me.
- The NCESS the platform.
- To the frustration of time tural like me, you would like even more Controller ... but 18 buttons, one sees so often not the end, all the same ...
- When using the patches on the Internet, we do not know forcment assignments buttons: yes, there is no srigraphie faade on the craft.

I do not see much else.
In its favor, I'd say it's a synth that leaves room prpondrante the Fast Fashion. Obviously it can emulate the old analog, but again, its true potential RSID in programming and the many "audioriginalits" that can be drawn.

There are not many competitors, so I did not really hsit. At that price I l Rasht eyes closed. A three times that price, I would go for the G2.
I put 9 / 10 because every time can you put 10/10? This is not me who lack the desire.

vetjc's review (This content has been automatically translated from French)

Clavia Nord Modular Rack
4
- What type of keyboard (synth, piano ...)?
Viruel modular synth rack 3U (3U but he he needs 4 to enter ...).
- What connections (audio, MIDI pedals ...)?
1-4 audio, MIDI In / Out + PC In / Out (required for editor), sustain pedal and controller pedal.
- How many sounds, effects? What styles? Are they edited?
Sounds and effects and unlimited editable since it's a modular. Style: all electronic.
- Via a utility Mac / PC?
It's his big problem: The PC editor that works exclusively in W98 (I tried under Wine in Linux and it crashes under virtual machine seven or XP (virtual box) and it crashes. There remains the option of Nomad Open source but I also had problems with crashes) is good but is more developed ... Mac, it is reliable even after OS 8.6, under X, there is a beta but not on Mac, I do not know what it's worth ...
- What is polyphony? ...
Editable: max 32 with a single oscillator but max 4 when the patches become more complex.

- The general configuration is simple?
The publisher is very simple. However, it should know a little terminology of modular synths. This is perhaps the best way to learn this synthesis because it can not make connection error because the publisher says when possible. The machine is autonomous once programmed, but it is not programmable by itself. The editor is therefore required even for Loader patches already.
- Editing of sounds and effects is easy?
Yes ... with the editor
- The manual is clear and sufficient? ...
It is, to my knowledge, available only in English but it is a very good textbook.
I put 8: 9 / 10 for the manual and the quality of the publisher -1 for the fact that he is no longer followed by Clavia, and that it takes a w98 below the elbow ... (See Nomad ... I do not know what it's worth ...)

- The sounds they are suitable to your style of music?
Electro ... Clavia sound is not a myth is a reality ...
- Are they realistic?
Is this the end?
- Effects are they effective and appropriate?
We must do everything yourself with modules ...

- For how long have you been using it?
4 months and am starting to master it.
- What thing do you like most/least about it?
Most: the modular / Least: buying an old PC to 10 € on Ebay for the original publisher ... I wish the sliders sequencers are controllable by knobs or MIDI ...
- Did you try many other models before getting this one?
Apart from this model and the G2 which costs an arm and more, we must go on true modular ...
- What is your opinion about the value for the price?
Today excellent (I got it in very good condition Used for 300 € ...).
- Knowing what you know now, would you make the same choice? ...
Sometimes twice a day ...

Listen to the 12 audio files about Clavia Nord Modular Rack »

View the 5 files about the Clavia Nord Modular Rack »