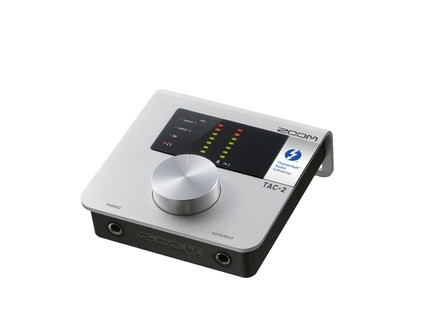 TAC-2, Thunderbolt audio interface from Zoom in the TAC series.

Zoom TAC-2
4
I've posted a youtube video of my comparisons on these two products. I will admit, without looking at the video I had a hard time telling which was which. The Duet was an older unit with the older computer but it had a slight advantage on a cleaner, clearer sound then the Zoom TAC-2 which was recorded on a new Macbook Pro Retina with Thunderbolt input.
The Zoom is incredibly painless to use. Plug in in, plug in instruments, open software and record.
The Duet has the messy breakout cables that are a pain. Plug in Duet, plug in breakout cables, plug in instruments, open software, change settings, record. I don't know that TAC-2 would be the most cost effective unit in this price range. I thought it was a bit on the high side for what you got. But it was easy to use and had good results.

I wasn't able to get the Zoom to work with my older Macbook Pro, which had the older firewire 400 connector for the Duet. Still working on that. Would like to do a sample running each through the left/right outputs on mixer with clean settings, doing same song with both units hooked up and recording at the same time.

Will try to do that before sending the Zoom back in exchange for the new Duet. I loved the Duet.

I recorded the same song with same instruments/mics; Martin TS cable plugin, Audix OM2 mic XLR cable plugin, and tried to match the recording levels. The Zoom onboard level meter was all over the place. It recorded a little hot, with 3 Green bars and the next setting went to overload red. Had a hard time getting a good volume without distortion. Wouldn't give me anything in-between so I used the software mixer which was much better.
After recording in REAPER, the Duet on the old Macbook Pro, the TAC-2 on the new Macbook Pro Retina, I matched the volume levels as close as I could and spliced in and out with the sound between the TAC and DUET.
I recorded the actual Reaper screen for playback so you could see what was going on.

Video can be seen here

Zoom TAC-2 manuals and other files