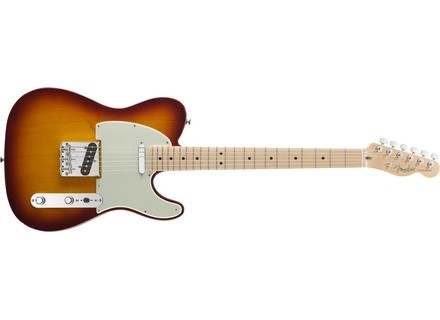 ludwu's review (This content has been automatically translated from French)"Fender Telecaster Empress: A work of art"

Fender Tele-Bration Empress Telecaster
5
Made in the USA, the Empress Telecaster born the 60th anniversary of Fender is a jewel manufacturing. Available in Europe only 200 copies, it is there in our hands, a guitar that exudes the application and knowledge of Fender. Certainly, it was not made by a single master luthier and it remains the industry, but believe me, when you hold it in your hands, you are doing no difference so its brightness makes them happy.
Purchased from Guitar Legend, service hair. It&#39;s worth putting in a little more expensive than buying them on the internet and be surprised to have a guitar that does not sound like they had tried in stores. A guitar sounds never really the same way a guitar to another, yet the same model.

Light thanks to its wooden body imperial tree (paulownia), according to Chinese tradition symbolized by the phoenix, the Fender Tele Empress is made more enjoyable to play. Hand runs along the 22 frets with ease and maple neck as "modern C" is perfect. The key is also maple.
The bridge is Vintage Style Tele Bridge 3 - Special Saddles, fixed with through-picking at the back of the guitar strings.

On microphones, they did debate on the canvas at the output of the guitar. Highway One seemed indeed offer the same microphone for much cheaper. Since it was confirmed that micro-type single coil Alnico 3 Fender Telecaster ® was specially made to mark the 60th anniversary of Fender Tele for the Empress, "New update:
the guy from the music store called Expired me and Told me he phoned with Fender And They
Told him That The pickups are special Alnico III pups made for the Empress Tele That thesis and are not the standard Highway One pups.
So it looks like it&#39;s wrong That a lot of music stores (eg Thomann) show Highway One pups for the Empress Tele On Their Site. "
Ref:
http://www.tdpri.com/forum/telecaster-discussion-forum/323283-empress-telecaster.html # post4101916
http://forums.fender.com/viewtopic.php?p=924377&sid=6e77599921fcec5534f23b48efc016a7 # p924377

It seems that micro alnico 3 have actually been supercharged to give them more pep as can be seen in the following description of the merchants;
http://www.valleyblues.fr/fr/guitare-% C3% A9lectrique/tele-bration-empress-telecaster


Personally I&#39;ve tested version of the Highway One store in Paris, along with the version Empress. This is the day and night. Sound to a clean her character on the empress, more punch, more definition, more medium, alot more sustain ... Concerning the handling of the machine, Highway one is on the street. I did not hesitate to take the Empress rather than the Highway one, it was not comparable.

To continue on the Fender Telecaster pickups Empress, they are switchable 3-position, bridge, middle and neck.
The neck pickup is the one that impresses me the most. It has an incredible character. I love it for its funky, bluesy side, but I also use it to play songs from "muse" in distortion, it is to tell you! This is a very powerful single-coil microphone, with a sustain that literally blew me away.
Trestle found a little less character for my taste. But it also has more bass on this side, and it&#39;s nice to play with finger picking. It also allows you to play more rounded than other positions.
In middle position I love! When you just can not find the sound we are looking for in the other two positions, one enters middle and magic, it works! A little bit of tone control and hit a perfect blend of the bridge and roundness accuracy and character of the race.
The first time I tried this guitar in a quiet home after buying it, I really, and this is not a joke, put a good 5 minutes to realize what was happening to me. I was captivated by the sound of this guitar! And that sustain ... !

Side tone knob, it is on the Greasebucket. That is a high-pass and low-pass at a time. Conventionally, the tone knobs pull treble (low-pass). Here the circuit is a delicate balance between high-cut and low cut, which has the effect of raising the middle area in which the empress Tele excels. In time, Fender had already released a very similar circuit with the "TBX tone control." Personally I love.
The volume knob is also not neglected! We are here in a potentiometer that perfectly sound control that is desired. The volume falls or rises barely touched the knob.

I use it every day for the past 4 months. I spent a lot of time scouring music stores to try side fender and gibson guitars. I tried above my means in 2500-3000, below my means, and at my means. I am very satisfied with this purchase. It was a favorite both sound, and visual. I would do the purchase again if I do not own.

hugodc1's review (This content has been automatically translated from French)" "I still dream of it ...""

Fender Tele-Bration Empress Telecaster
5
See website for details Fender but what left me a little bitter taste is plastoc cache 'of micro switch which is very "cheap" especially when it is off and I had to return the flycase ( included with and is of course nikel) to find ... A point of glue and the problem is in the archives.

No problem with the volume switch, no noise / interference / clicks while we're going as a bully. For the tone knob, nice not to have too low invasive when cut but I prefer shades that binary settings.

Mechanical yet well-oiled, nothing moves, wood is not young, even with the weather which went from a mild late summer cold harbinger of winter, nothing-moves. Treat it well and it will reward you!

After 4-5 years on a 7 string to freight almost every day and jumbo frets for acoustic nylon, I thought playing on a ukulele the first time!

Touch is like touching a piece of art of a master carver, fingers agree to handle easily taking you along the frets nicely arranged from start to almost finish. Cutting a little deeper and my paws reach the end. It is light, a current of air and it flies when you play standing weight inspire you to undress for lightness.

Versatile guitar well, although I reconnected my friendships with passive pickups, their dynamics and made hotter, it is not for all styles of music even if it defends well! Stands up very well especially in the midrange spectrum.

I use it with an Engl Invader 100W with 4x12 cabinet fitted with Celestion Vintage 30 is the result of too mediums because it is thought to set one schecter hellraiser c-7. on the other hand with my pod x3 live mics fish with too much distortion but this kind of grat is not to hide behind his sound too much distortion and other effects!

The sound is very clear, great set, good momentum, then it's a matter of taste, ear and color of your gear and made the room in which you play. TEST-LA because it is the only way to get to the bottom!

Used for 3 months, a small problem with the switch cover but quickly adjusted.
Past 3 years to find a twenty tried, extremely comfortable access to treble is very good, almost perfect. The price is a strong argument ... yes it has a price but the quality justifies material, trademark and know-how.
The wood used is not very well known, I do not know but this is not to say that is not suitable for the violin!