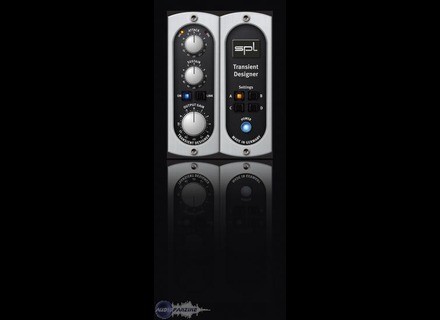 All user reviews for the SPL Transient Designer

SPL Transient Designer
Setting up is simple, I don't really remember it that well, which I guess is a good thing. It used some normal means of pirate protection. Probably an authorization code. Installation was very quick, as it was just a small effect.

The interface of it is very simple. With only a few options and knobs it's impossible for anyone to get confused for long. There is a release and attack knob which basically do all the work. It's really as simple as that.

The software is very light on the CPU. I can have many instances of it running at the same time without any problem. No crashes or anything. It works great with FL Studio, loads fast, and has never given me any headaches. I'm running a Dell XPS Studio PC with Windows 7, six cores, and 6 GB of RAM. I'm sure anyone with a computer less suited for music would still not have any problem running a lot of instances of the SPL Transient Designer on their computer.

I love it. I use it for all kinds of things. Sometimes I'll take full bodied snares and turn them into little quick hits perfect for snare rolls. Other times I'll simply add punch to my kicks. It's amazing to me how there are countless threads and conversations around the internet regarding punchy kicks, but I've never seen anyone recommend the SPL Transient Designer. Instead of messing around with EQ all the time, even though it's the answer sometimes, you can simply turn up the attack on the SPL transient designer and boom, done. It's a great, inexpensive, underrated, tools that should be in everyone's studio. A lot of people don't know what a transient designer even is. I'm glad I made the decision to find out.
Did you find this review helpful?yesno

The studio that I work at is running the SPL Transient Designer plug-in on a few different systems, but all of them are TDM version of the plug-in on Pro Tools HD systems. The main room has a Mac Pro desk top consisting of dual 2.6 Intel Xeon processor and 10 GB of RAM, so if there were any doubt of it running in Pro Tools HD, which there weren't, it would surely run on the computer power alone. If you're running an LE system, as long as you're currently able to run plug-ins comfortably, I believe you'll be fine with this one.

Basically, the SPL Transient Designer gives you this unique dynamic processor right in your DAW. It's not the exact same as the hardware Transient Designer, but it sounds pretty great nonetheless and is definitely an adequate substitute. If you're not familiar with the Transient Designer, it's one of the coolest processors out there and it's great for cleaning up a sound and helping it cut through a mix - especially for drums. It is kind of pricey however, which is really it's only downfall as it's almost worth it to pick up the hardware version at the price they're asking for the software. Regardless, this is a great plug-in to have around, especially for mixing engineers...
Did you find this review helpful?yesno
Cookies help us improve performance, enhance user experience and deliver our services. By using our services, you agree to our use of cookies. Find out more.