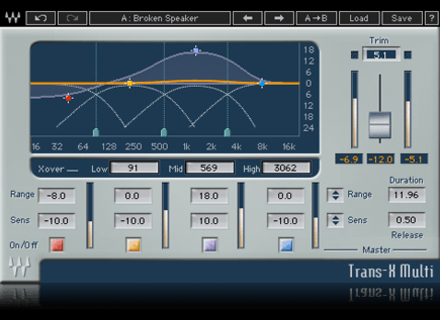 All user reviews for the Waves Trans-X

Average Score:4.0( 4/5 based on 2 reviews )
Buy this productView price information >
Not satisfied with those reviews?
Our members also liked:
Buy at Sweetwater

Waves Trans-X
4
Transients are very important in music, especially in drums. Getting them right can make a mix sound extremely dynamic and realistic. Get them wrong, and it can sound very flat, almost as if a robot is playing instead of a normal human being. This plugin is a transient plugin to help modify/shape the various transients. Waves mostly advertises that this be used on drums, and I agree as that's where the most extreme transients tend to occur. The plugin has two components and has the following features: Crossover cutoff with low/mid/high adjustments, graphical control over the plugin, range, sensitivity, on/off band switches, duration, release, trim output gain adjustments and more. To use this, simply enable it on whatever buss(es) you want it to be on inside of your DAW. I never read the manual, but this should be easy enough to use without having to read a manual.

I've used this very successfully on drums, and it helped make everything sound more dynamic overall by giving me some more control over the different drum transients. I tend to find myself using this more on rock and 80s style metal than the death metal that I normally play simply due to how the dynamics present themselves in the genres of music. Regardless as to what genre you play, there's almost always a usage for this at some point in time, in my opinion.
Buy at Sweetwater
Did you find this review helpful?yesno

Waves Trans-X
4
Waves TransX is a transient designer plug-in, which I believe is the only of it’s kind that Waves has to offer. It’s available for any and all DAW’s and can be purchased both individually and is also found in a few Waves bundles. I’ve got the plug-on on my home system and definitely find myself using it a lot. Using the Waves TransX plug-in is generally pretty simple, as it splits up into three main band sections. Each has frequency control, range, and sensitivity to go along with a graph that shows everything. It also has parameters for duration, release, and trim. It’s not at all like the other transient designers that I’ve used from the likes of Eiosis and SPL, the latter of which is most well known for it’s transient designers and definitely has the best ones that I’ve used. If you’ve never used a transient designer before, this isn’t the easiest place to start, but still shouldn’t be too difficult to get going with. Unless you’re a beginner with it, you most likely won’t need a manual.

I’m currently running the Waves TransX plug-in in Pro Tools 9 on my system at home. We’ve also got it on the systems at the studio where I work, and I do a lot of going back and forth between these systems and mine at home. At home I’ve got it on a MacBookPro lap top that has a 2.2 Ghz Intel Core 2 Duo processor and 4 GB of RAM, which is more than enough to run TransX as I need. I’ve probably never had more than three or four instances running at once, but it still runs smoothly at this rate.

It’s really a great thing to have a transient designer like the Waves TransX that has so much control. The other transient designers that I’ve used don’t take this same approach, but that’s not a bad thing at all as this gives me a different look at this kind of processing. I use this mostly on drums, but it’s great for a variety of purposes. I will say that I like the SPL transient designer plug-ins better than this one as I find them smoother and simpler to use, but TransX is still very solid in what it can do. I’d recommend going with an SPL plug if you’re going to buy TransX individually, but if you’re getting a Waves bundle with it, it’s definitely going to do the job well for you.