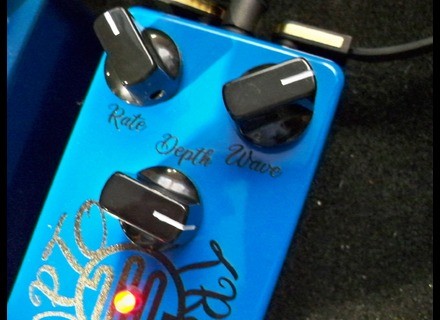 Ananashead Effects OptoTrem
5
SOUND:
One of the best sounding tremolos I’ve come across, and straight-forward in use.

The OptoTrem allows for a change in Rate and Depth, while adjusting the Wave, while the quality is so warm, organic and lush. If you’re looking for a tremolo with a bit more ‘cut’ or bite, then the OptoTrem may not be the best solution since it is a warm tremolo. Where this tremolo shines is with music that is not too complex (e.g., a lot many instruments or in a distorted setting), but definitely with ambient and ethereal music, whether instrumental or perhaps something with a Pink Floyd vibe. The tremolo effect is heard slightly at about 9-o’clock, whereas 12-noon the effect seems to be in parity with the original tone. At 3-o’clock and greater you hear almost nothing but tremolo, which sounds absolutely dreamy, as though the notes are floating on clouds. The Rate ranges from a slow pulse to a fast stutter, and likely faster than anyone requires (a machine-gun rate when turned full). The quality of the wave varies, from Square (all the way counter-clockwise) to Triangle (all the way clockwise). The wave tone or quality around the middle (between 10-o’clock and 2-o’clock) has more of a sine/rounded square character with a bit of asymmetry like an amp trem. Any background pulsing noise (typical with tremolo and vibrato pedals) is relatively low and only slightly noticeable when playing ceases and the listener listens for it.

OVERALL IMPRESSION:
The OptoTrem is priced reasonably at 110 Euro, particularly for the quality of construction and sound. Designed and hand-built in Spain by a lone individual, Pedro Garcia (who also does custom mods), the OptoTrem is his latest offering – and his company as a whole should be looked into as he has some really great sounding gear. As for the OptoTrem, which is an optical tremolo (hence the name), whether using a square wave with a bit more edge, or a triangle wave for a smoother transition (or something between), and combined with any measure of Depth and Rate and you will achieve sounds incredibly smooth and organic, as though the tremolo is part of the guitar’s tone as opposed to an effect added on the side. As an important feature, the on-off switch is popless true bypass, which means you’re not going to hear any clicking or noise as you turn the OptoTrem on and off.

GENERAL USE:
From subtle wave to a fast pulsating ‘surfer maniac-paced’ tremolo, the OptoTrem has all the bases covered. Consequently, all bases are covered. Depth at 9-o’clock makes the effect (rate and wave) audible, although very passive within the mix. The tremolo becomes more obvious at 10-o’clock and definitely present around 12-noon. Once you get around the 3-o’clock range or greater you hear very little of the dry mix, which makes for some utterly beautiful ambient results. The Rate goes nuts at 3-o’clock and beyond, and I suspect most people would use the OptoTrem between 9-o’clock and 12-noon (unless you like Surfer music, which means pushing past 12-noon). A low Rate gives you that warbling Pink Floyd quality, whereas 12-noon works perfectly for playing the theme to Twin Peaks. The Wave knob will give you a harder hitting square wave when turned all the way counter-clockwise, and smoothes out considerably with a Triangle wave fully clockwise. Anything between will give a mix of results best described as a sine/square (similar to what you would hear in most amp tremolos).

OTHER DETAILS:
OptoTrem is a regular-sized pedal, OptoTrem, measuring 112 mm (L) x 60mm (W) x 50mm (H) with knobs (4.4 x 2.4 x 1.97 inches). The heavy duty chassis is powder coated in dark blue with black lettering – the pulsating LED light (to indicate Rate) is centered nicely within a wave graphic for a pleasing look. The three plastic knobs are a heavy quality and should withstand normal use and abuse. All knobs have good quality pots (smooth and solid when turned). The Alpha footswitch (on/off) produces a solid click when engaged or disengaged – there is no popping when switching. The cable input/output and the power input all are located in the back, which saves on pedalboard space, but also keeps them in a more secure location. OptoTrem has shielded inputs/outputs to avoid radio-frequency interferences, as well as Alpha potentiometers with dust shield. Other quality features include Panasonic and WIMA caps and 1% metal film resistors for lower floor noise. Finally, the OptoTrem has a filtered and ‘wrong polarity’ protective 9VDC power input (requires standard 2.1 mm center negative jack) while drawing 24mA of current.