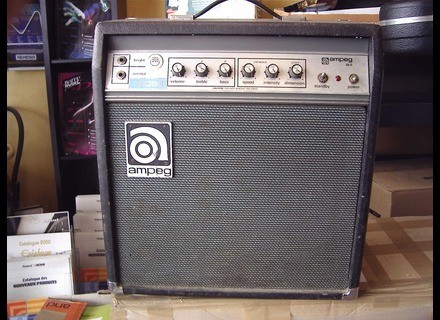 Ampeg GU 12
5
This is a solid tube amp that was originally designed back in the 1970s. It has two inputs (high gain and low gain) for a single clean channel. There are 50 watts of power. The amp features controls for volume, bass, mids, and treble, tremolo speed and depth, reverb, and master volume.

This amp is a basic plug and play kind of amp. There really isn't a whole lot of manipulation involved unless you want the tremolo or reverb, and even then the adjustments are minimal. I didn't use a manual and in no way did that hinder my performance with this amp.

The sounds that emerge from this 1970s amp are actually far closer to early 60s sounding Rock and Roll. I immediately thought of the Hollies when I plugged it in with my Strat and Tele. I don't like it very much with a Les Paul, I think single-coils are really the way to go with this one. The tone is super warm normally, and can get a tone of great kick without distorting too much. Distortion is not the name of the game with this amp, at least not the way it comes originally. I've heard that opening it up and fiddling with the circuits, swapping tubes, etc. allows the distortion possibilities to come through, but I haven't had the nerve to try that, especially since I really like the amp the way it is. For anyone who'd never want anything more than natural overdrive, this is a real treat.

I'm beginning to think more and more that there are a lot more good tube amps out there than bad ones. The more I try, the more I like. This one isn't always too expensive used, I don't think they even make them anymore, unfortunately. This is definitely a sleeper hit, worth checking out for blues players, jazz guys, EARLY garage rockers, etc. Anyone looking for more than post-White Album fuzz should probably avoid this one.

fabnukem's review (This content has been automatically translated from French)

I bought this for US ampeg, a song, 180 Dollard,
I was afraid to do something stupid so the price was low,
then I slaved as it was 110 volts,
I adapted a transformer ...
I had to find someone able to Retube and to restore some lamps was no longer ...
I finally found (in Angouleme, if someone wants to contact, a guy who remade vienx amps, which retube, which makes m ^ amps and provides serious!)
well, after several months waiting I was finally able to play and there is nirvana, (even in the sense of the term cobainien!)
small in size this amp has great sound, what I was looking actually ...
an amplifier with character, a unique sound, both hot and dirty but not soft, very sharp, somewhat between a vox and a JCM800! I did not think it would be as powerful to play on a big rock scene, it works great, no need to push not to ring, three flight it work with a boosted signal upstream it's great ... and if you put the volumue to 7, 8, it tears the ears, bondiiuu ....
what a sound!
a vintage sound, unique to 400 euros (counting all the costs of relining etc ...)
channel offers a bright-edged sound, with a powerful attack and a unique sound, typical ampeg (we can never say enough, but made ampeg guitar amps, marshall who have the shadow, it's the amps that are low back the legend ...)
the normal channel is more powerful (!!!) and hot, dirty blues, garage, grunge etc ...

I instaled a grounded, there was none, and I have almost no buzz, yet I have a bunch of distortion pedals including 2, DS1 and a Big Muff and it does not buzz any more than a transistor amp ...

being fan of the band "the former" (among others), knowing they were playing on ampeg (enrte others) I tried an amp ampeg GTRE brand,
good pick ...
we can find but still have to be patient ...

I put 10/10 biensur but for convenience it is to think, I speak in conversation, and nature of the beast, it is imperative to know someone well or tinkering ...
on the other hand it is not fragile, beefier as well as our newer tube amps, it can grow long and ...
What is the vintage ...