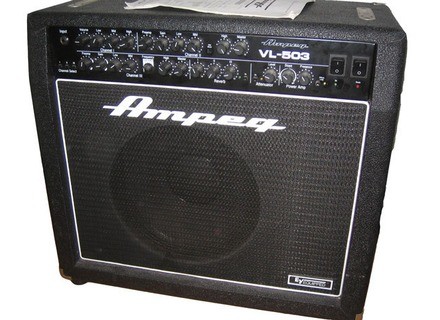 Paid $300 for the first one in a friend's pawn shop about ten years ago. The second I bought this year used $400 at the local Guitar Center Store.

It is the only amp I certainly will ever need..has POWER (with the 6550's) the best guitar speaker in the world (EV 12 in.)the three distinct peamps are outstanding. and typically solidly built and HEAVY like all Ampegs. (I also have a VL-502 head, an OLD Gemini 2, and a Rocket.)

Both have broken and required the services of my famous amp guy...mostly having to do with the circuitboards getting failed solderings. The adjustable bias deals are twitchy....just set them a tad low and they're ok. Overall though, no worse than the Fender offerings that I have owned but always got rid of as they lacked the Ampeg OOMPH. I have had both my 503's
fixed once. Two make a rather incredible stereo set-up, especially of you use a good Marshall Vibratrem...the tremolo sounds gigantic, tsunami-like rolling back and forth.

Top notch and top tonnage; the cab is indestructable. The casters are swell, and don't try to wang it around by the sturdy handle with one hand; unless you're Arnold or Steve Reeves. You do not want to drop this honker on your foot. The circuit boards seem to be the weak link, as is the odd connection for the footswitch that looks like something off the wrong end of a telephone. But I'll say it ain't failed yet, even though it looks like it may at any moment! Like I said, each amp failed once...since then no problems and these things get played LOUD continually betwixt myself and my son. No tube failures and the EV is operating way under potential even with full volume cranking.

Best amp I ever owned. Once broke,once fixed, stays fixed. While it can be painfully loud, Lee Jackson did such an excellent job designing this thing that tonal quality is preserved at excessive decibels. The range of the three preamps is astounding, the reverb is perfect, and the attenuator feature should be standard issue on all big strong amps...it is wonderful, and you don't need a big ol' Marshall Brake deal to lug around. The 503 is quite enough to lug around! And that EV speaker....what can one say about those things...just a perfect match to this amp. I've heard folks having unfixable problems with these units but this is not my experience in ten or so years with them. Buy 'em whenever youcan find them, E-Bay not withstanding.